This is a very interesting ad from June 25th, 1958. WSCR was the Top 40 Radio station that was competing against the "New WARM". The guys on the top of the ad, Terry McNulty and Ron Allen later went to WARM Radio. McNulty was the first News Director of WARM Radio and became the prime newscaster taking over fo Harry West who moved to the Morning Show.
Ron Allen manned the 3 to 6pm shift for years until moving into sports.
The man in the middle was ed Hughes who stayed at WSCR until 1969 when he was named Mayor Gene Peters Communications Director. Hughes ran for Mayor in 1977 but was defeated in the primary by Reverend Vernon Searfoss. Hughes also served as treasurer of the Professional News Media Association of NEPA.
One of the interesting segments of this ad is the inclusion of a program aired Monday nights featuring Skitch Henderson. Henderson was the Conductor of the Scranton Philharmonic and later became the band leader for The Tonight Show when Johnny Carson took it over in 1962.
The hybrid programming though on WSCR is telling. Top 40, personalities most of the time but THEN a shift in gears to Classical programming. Now I'm sure this was a business and advertising decision but in the early days of the New WARM, this wouyld never happen.
WARM built its success on being consistent an redundant in that consistency. No deviation from  message and format, plus the picking off of key WSCR staff made WARM number 1 in a hurry. They sayed that way for years ever after. 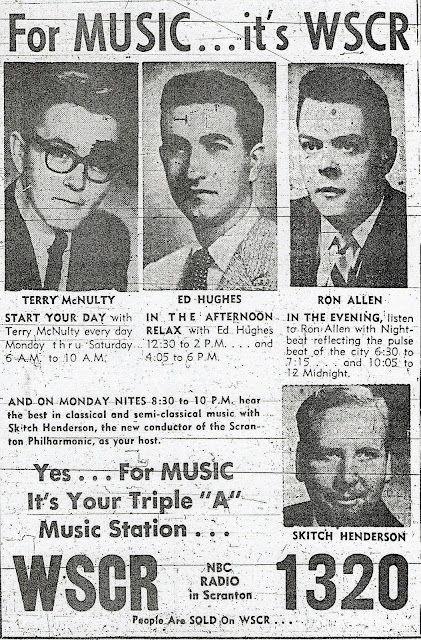 Since WSCR was a type of proving ground for WARM, we thought we'd include this ad from 1959 featuring McNulty before he was "The Big Fella" on The mighty 590. WSCR was owned by Tom Rice, was an NBC affiliate and ran top 40 music.
The station was later acquired by WARM Radio legend of the 70s, Bob Woody who turned it into 13Q.
When the station finally went dark,  the call letters went to a Chicago Sports station.  Here's that ad. 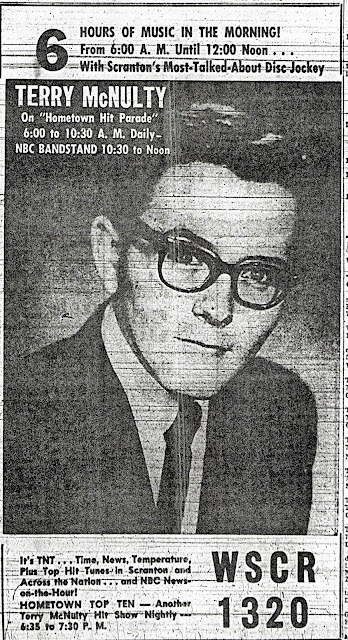 The mystery of the Question Mark is solved when a photo appears of Jack Murphy. Apparently the people promoting The New WARM put a Question mark in the previous ad in the Tribune to accelerate conversation and get people talking. Or maybe Jack was too shy to take a photo. Either way, a month later, after some buzz, the Sensational Seven tableau was complete in sound, print and sight.  This ad ran on September 7th, 1958. 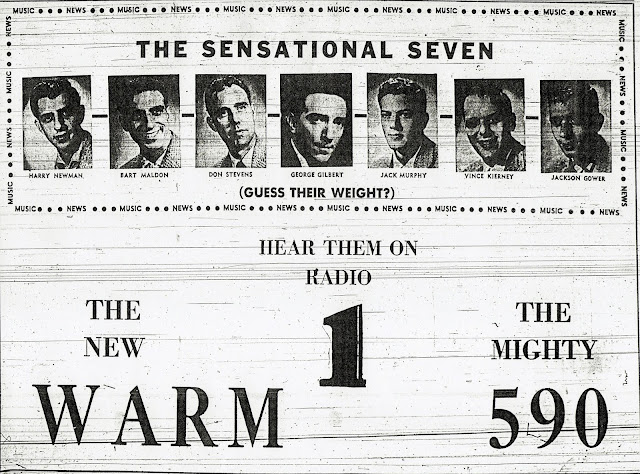 When WARM Radio signed on the air on June 19th, 1968 as the NEW WARM, the promotions began. Here's an ad from August 3, 1958. Right out of the gate, WARM Radio was RADIO 1. Check out Don Stevens and George Gilbert. This was the original Sensational Seven.
Notice that Jack Murphy's photo had a Question Mark. There are many who feel this was a WARM tease to get people talking. For more than a month, that Question Mark made the rounds of teen hang outs, beauty and barber shops and every summer poll in what was to become WARMland. 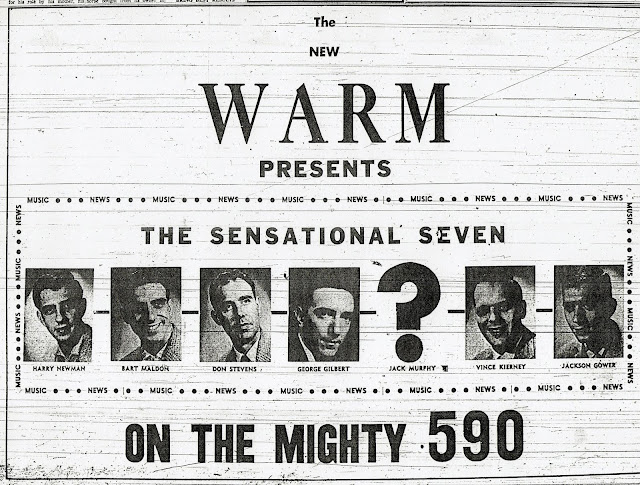 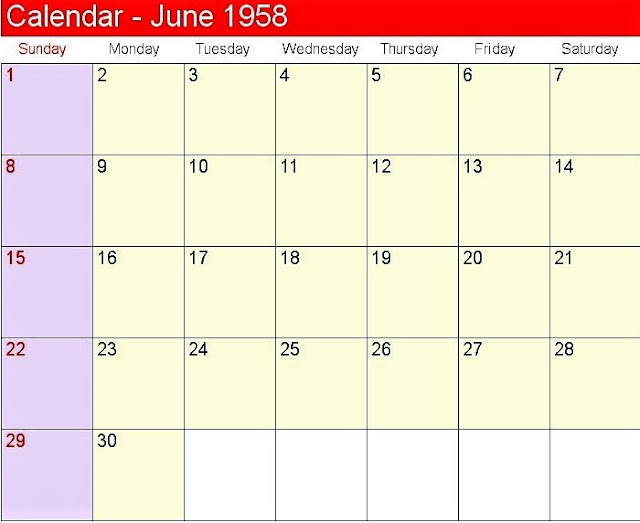 THE MIGHTY 590 SIGNS ON  SIXTY YEARS AGO 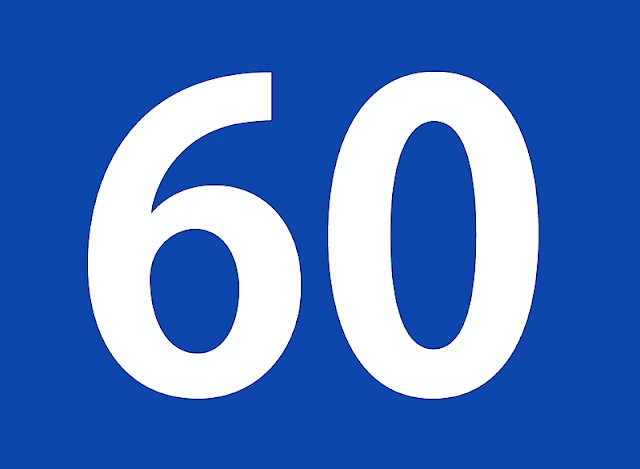 Sixty years ago this month, WARM Radio became THE MIGHTY 590! An era of music, information, news, and public service began! WARM took the area by storm and remained a dominant ratings leader until the summer of 1976 when WGBI FM (once a beautiful music station) went to rock and roll automation.
From '76 on, WARM then began a transition to hybrid formats of sports and entertainment, then personality and talk,  straight talk, and now primarily network sports.
WARM's, current format is primarily all network with very little local interactions. Strange but that was the way WARM started in 1940.
The frequency  is two years away from 8 full decades. There were many programs, personalities and formats along the way. But many will agree that from 1958 to 1976, those were were the halcyon days of The Mighty 590! 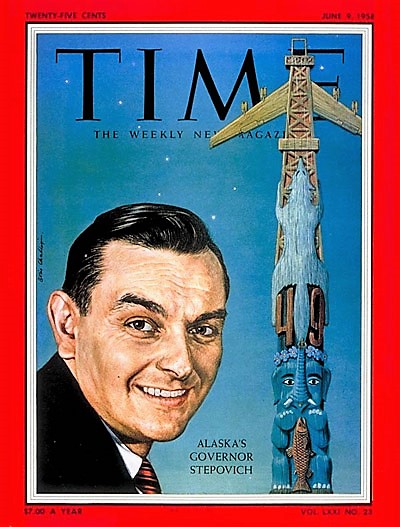 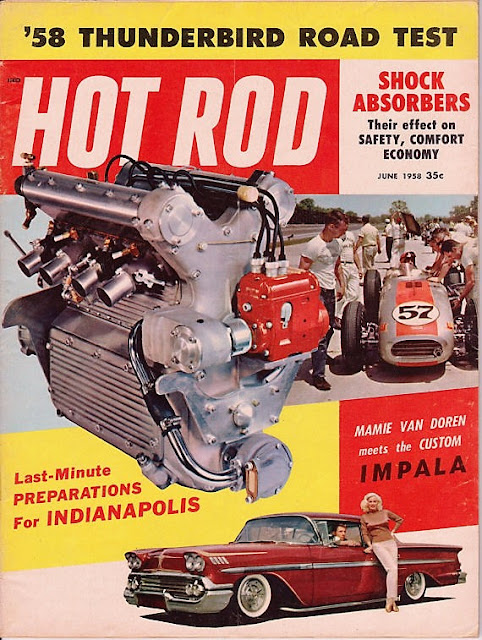 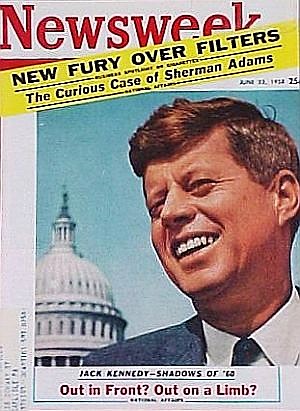