Word came today that Jerry Heller, the broadcast voice of WARM News on The Mighty 590 from 1969 to 2003 passed away. Heller had been in ill health for a while and it goes without saying that he as well his family and friends will be in our thoughts and prayers.
Heller first came on the WARMland scene suddenly replacing Jack Doniger who exited the station in 1969. Doniger who was a foil for Harry West on his morning show left around the same time Harry did. Heller came on board and immediately made an impact with his straight forward reporting and on air delivery. While his predecessor was a tad bombastic with a deep voice (sometimes being echoed in the WARM format at the time) Heller brought a Midwest, articulate presence that was both aspirational and soothing to WARM listeners. High school teachers I had used Heller as an example of how to speak, how to send a message with concise verbs and nouns.

I first met Heller in person when I was interning at various stations when I was getting my degree from King’s College in Communications and Government. To gain the degree from King’s I had to go to radio and TV stations. When I was assigned to WARM Radio for the first 3 weeks, I was ecstatic. It was winter and the weather was cold and miserable. Heller greeted me with a warm extended handshake and asked me what I thought of WARM News. I told him I loved it. He looked at me quizzically and said, “Not many kids your age like news” and I told him that I was a political news junkie since I was 10. He then asked me if I thought a Communications degree was actually needed for someone aspiring in broadcasting. I mentioned to him that this was part of my other major and was offered to me because of my interest in radio. I told him I figured two degrees were better than one! But he said, “You didn’t answer the question. Do you feel a person can succeed without a college degree in this field?” I answered “Absolutely. Look at some of the great radio people of our time. You didn’t need a degree to understand the complexities of World War II if you were a foreign correspondent like Walter Cronkite or Charles Collingswood. You didn’t need a degree to ask the who, what, when where and how questions. You didn’t need a degree if you had a great set of pipes”. I mentioned my own cousin who was at that time working in Pittsburgh radio and told him I wasn’t sure he had a degree but knew he was in a top market in the state. He nodded and said, “I’m sending you out for a week with my two best reporters, Kitch Loftus and Kevin Jordan. Talk to me on Wednesday again.

So on a Monday and a Tuesday I went with Kitch Loftus to various news stories. One was with the late Mayor Walter Lisman’s news conference in City Hall in Wilkes-Barre. Now as an employee of that institution, I pass the downstairs anteroom where the reporters used to gather to await the pronouncements from the Mayor. Most of the stories were about the re-building of Wilkes Barre after the Flood of ’72. Wednesday Jerry was out an appointment so I went to Scranton with the late Kevin Jordan and covered things going on at Scranton City Hall.
On Thursday morning I met up with Heller who was a little annoyed with me. “So Kitch and Kevin tell me you work at WVIA FM and are on the college radio station?” I answered, “Yes”. “Why the heck didn’t you tell me that?” I mentioned that I was there to learn and didn’t want to over step any bounds. He said, “Boundaries in broadcasting? You’re kidding me right?”
He then reached into a cabinet near his desk and pulled out a cassette recorder. Then a pair of alligator clippers (they were used to take the bottom of the phone that you spoke into. You took the mouthpiece off and clipped them into the hooks and sent your sound in from the recorder.) putting them on the desk. He then said, “Forty Fort is having a meeting about their Airport paving at 11am and then I need someone to get sound on how people around here are coping with the winter weather and the potholes. Send it in and we’ll see if we can use it if it’s any good”. Anything else I remember asking? “No just go” he said.

I took the recorder, jumped in my Nova and I was free labor for WARM First News First. Heller used every one of my reports and sound. He critiqued my delivery (I never personally got on the air with any of them) but he did use my sound. I understand later that he told my instructor to give me an A minus for my effort. The Chairman of the Department, Father Corcoran  asked him why it wasn’t a full blown  A. Heller responded, “He should have told me he knew something about broadcasting. I could’ve used him earlier”.

Here’s what’s significant about this interaction. At the time Heller had what I consider to be the crown jewels of radio broadcasting in his news stable. Along with Loftus and Jordan were Ray MaGuire, Terry McNulty, Ken Curtis,Rick Herold, Bob Crawford, Andy Palumbo, Ruth Miller, Paul Degnan, Mark Thomas  and a few others I can’t remember. WARM had news 24 hours a day back then. The newscasts were expanded on the hour. Kitch Loftus told me, “You can set your watch by WARM news. If you needed to get on the road to work by 7;15, when the 7am newscast was over at 7:10, you knew you had 5 minutes left to get out pf the house and started.”. Heller was the leader of that team. WARM covered everything. But for him, everything wasn't enough. If an intern from King’s could give him more diverse sound, then he was thrilled. Heller also wanted you to get three or four different takes of the same voice over because he didn’t want to have you listen to the same sound bites every hour.

To some not  familiar with radio of that era this might be a stretch. But I felt Heller was like a conductor  of an orchestra who every day wrote and performed a symphony of news. Plus, he made you better. Made you work better. Heller was the guy who orchestrated the news broadcasts that now sadly are only a distant memory.

Through the years after he and others were let go at WARM, I’d run into him and he’d be cordial. But we never talked much about WARM News.  It wasn't because he wasn't proud of what he did, but because I think we both had the realization that all that could be said about those glory WARM News days was that it could never be replicated. That was  due to money, budgets and the way broadcasting had evolved. Jerry and I never wanted to go down that road. But let me say this, if there ever was a local broadcast Hall of Esme, Jerry Heller would be in my top 5 for admission.

Jerry, I hope where you’re at now, the news is plentiful and the sound is just as melodious and even tempered as your delivery.
Rest in peace sir!
Posted by David Yonki at 5:17 PM 6 comments: 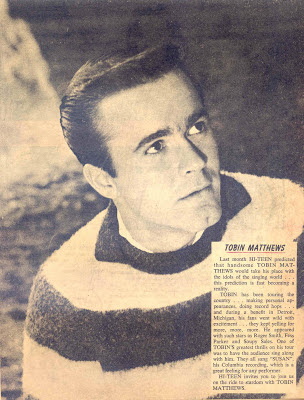 Tobin Matthew was an early rock and roll singer and who began my career in Chicago in 1957. He grew up in Calumet City, Ill. until the age of 21. His real name was Willy Henson. He got his start when Bob and Dick Poppel and Erma J. Nelson, all from Poppels Under 21 Tropicana Club in Riverdale, Ill., set him up with his  first band, The Rhythm Rockers.
The next band was Jimmy and the Jeepers later changed to Willy and the Jeepers He worked with a lot of the Chicago DJs, Jim Lounsbury, Jan Gabriel, Dell Clark, Howard Miller, Pappy John and many others. He recorded for USA, Columbia and Warner Bros. records from 1960 to 1966.

His daughters Holly and Carrie, grandsons Ty, and Cam, granddaughter Payge.and brothers, George and Tim, and sister, Marcia. enjoy listening to his oldies record collection. With the help of his daughter Hollie, he started documenting his early music career on a blog. Here’s that link:  http://earlyrockandroll.blogspot.com/?inf_contact_key=c459985d0844e9bb011b8ac46d755131680f8914173f9191b1c0223e68310bb1
Tobin Mathew was one of those rock and roll talents of the early 60s that tried their hand at hitting the top ten. The fact they didn’t certainly doesn’t diminish their talent and skill. Tobin Matthews passed away recently. He will never get to the Rock nd Roll Hall of Fame but surely is remember by his fans for his musical efforts. A song that might have registered on WARM The Mighty 590 was this blast from 1962, “Susan”.
Posted by David Yonki at 5:38 PM No comments: