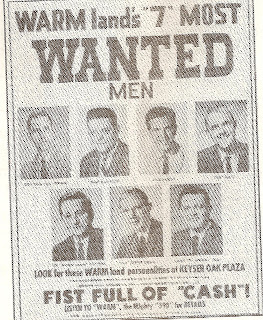 PHOTO INDEX: THE SENSATIONAL SEVEN IN A CONTEST AD FROM 1959.

WHO ARE THESE GUYS?

A question has come up as to the identities of The Original Sensational Seven from WARM. When I started this project, one of the toughest things finding out were the exact dates of what started and when. I knew from anecdotal evidence that WARM went rock and roll in the summer but that was it. The Sensational Seven names I know were King Arthur Knight, Harry Newman, Len “The All Night Satalite” Woloson, Ron Allen, George Gilbert and Don Stevens. I’m missing one. But the photo I posted from WVIA FM’s program guide has Harry West who arrived in 1959, therefore not making him one of the original technically. I’ve posted the photo, did everything to enlarge it but to no avail. As far as the Sensational Seven, the original, that’s all I got. The Sensational Seven became the six when Don Stevens left in the mid 60s and everybody seemed to get an extra hour. Anyone who can elaborate, please do.

The original posts to Memory #590 have been duplicated on Memory #589 because of a technical glitch. It might only be with me but I figured I wanted those comments read. They are appreciated.
As for the photos and e mails I’ve received so far, thank you. I’m putting them in files and I will use every single one of them. Keep ‘em coming.
One of the songs The Sensational Seven most likely played was this one by Little Anthony and the Imperials. 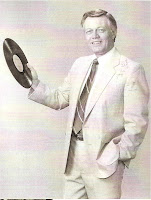 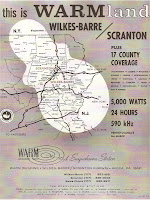 PHOTO INDEX: THE FAMOUS WARM COVERAGE MAP DEMONSTRATING THE POWER OF THOSE 5,000 WATTS AND HARRY WEST HOLDING A RECORD INDICATIVE OF ONE OF WARM'S STRENGTHS, ITS MUSIC MIX.
IT'S THE MUSIC!!!!
There is much debate as to what should be considered the first rock & roll record. Bill Haley’s "Rock Around the Clock" (1955) became the first rock and roll song to top Billboard magazine's main sales and airplay charts, and opened the door worldwide for this new wave of popular culture. Rolling Stone magazine argued in this century that "That's All Right (Mama)" from 1954, Elvis Presley's first single for Sun Records in Memphis, was the first rock and roll record. But, at the same time, Big Joe Turner’s "Shake, Rattle & Roll", later covered by Haley, was already at the top of the Billboard R&B charts.
As we mentioned before, Joe Dobbs' WICK Radio played some of the earliest rock and roll in the Wilkes Barre Scranton area before WARM. But when WARM signed on the air with rock and roll in 1958, this is some of the music the station showcased. “At the Hop” by Danny and the Juniors, “Twilight Time” by the Platters”, “April Love” by Pat Boone, “Little Star” by the Elegants, “Volare” by Domenico Modugno, “It’s All In the Game” by Tommy Edwards, “Sugartime” by the Mcguire Sisters, “Catch A Falling Star” by Perry Como and “Tequila” by the Champs were songs constantly heard on WARM during 1958. Perhaps the acceptance of this station across all age groups happened (notwithstanding the WARM news commitment) happened because Rock and Roll was just invading the pop culture of music. With rock and roll were the vestiges of the pop music of the 50s. The doowop of the Elegants was a perfect tonic for the smooth, lush sounds of the Platters. The early success of WARM as well as rock and roll was that the music with the beat also was palatable to the moms and dads who gave a listen to this new sound in town, WARM Radio. Perhaps no two songs typified the contrasts of music more than the Diamonds “Little Darlin’” (released in 1957) and Tommy Edwards’ “It’s All In the Game” from 1958. This music provided the bridge in styles, and WARM Radio gave people of all ages the vehicle for those great songs that became the building block for not only the Mighty 590, but for rock and roll itself.