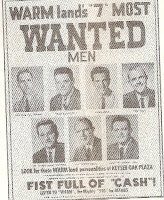 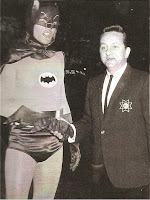 PHOTO INDEX: LEN WOLOSON WITH "BATMAN", A PROMO POSTER OF THE ORIGINAL WARM SENSATIONAL 7 FROM 1959, (LEN IS ON THE BOTTOM LEFT) AND A RECENT PHOTO OF LEN WOLOSON.
REMEMBERING LENNY
The local newspapers picked up on the passing of former WARM legend Len Woloson. Here is the announcement that ran in the papers today:
Len Woloson
WARM Radio's "Morning Mayor" of the '60s, '70s passes away.
Len Woloson, affectionately known in Northeastern Pennsylvania for many years as "The Morning Mayor" for his much-loved, hugely popular morning radio show on WARM Radio, passed away Sunday, March 22, 2009. His common-man combination of skit humor, the characters he invented and the more traditional DJ work in the emerging years of rock 'n' roll made him an early pioneer of the style so often used in radio in the decades since. In fact, Len was one of the Sensational Seven, a collection of leading DJs at WARM Radio so strong that they quickly piled-up listener rating points rarely seen at one station since. Though he worked in much larger metropolitan areas, like Detroit and Los Angeles, and was a featured personality of ABC Radio in the '60s, it was his WARM years in particular that so many in the radio industry remember most fondly. Len was born Feb. 18, 1930, in Hanover, and was raised in Nanticoke. After serving in the Air Force, Len was employed as a manager by Ford Motor Co. in Dearborn, Mich. While at Ford, he met and soon thereafter married Marian Jeffers, the love of his life to whom he was married for nearly 56 years. At the age of 28, Len embarked on a dramatic change in career path, becoming a rock 'n' roll disc jockey/broadcaster/ radio personality. His passion and talent for entertaining proved rewarding for Len, and ultimately, many millions of his devoted listeners throughout the country. Len started in broadcasting at WPTS, a small station in Pittston, where he served as the only disc jockey/broadcaster. Len then became the original "All Night Satellite" at WARM, which served the greater Scranton and Wilkes-Barre listening public. There, he refined his skill in weaving character and "skit" humor while presenting the day's then modern music, rock 'n' roll. He also had the pleasure of meeting and promoting young up-and-coming entertainers such as Paul Anka and Chubby Checker. After a brief stint in Providence, R.I., Len returned to the Detroit metropolitan area, assuming the entertainment name "Pat Mad Cap Murphy." He achieved top ratings in the multi-million listener market at the ABC owned and operated WXYZ radio, where he broadcast for nearly five years. While in Detroit, he hosted numerous "sock hop dances," hosting many "new" Motown performers, including Diana Ross and the Supremes, the Temptations, "Little" Stevie Wonder and Mitch Ryder and the Detroit Wheels. He also had the pleasure of "on air" interviews with members of the Beatles and the Dave Clark Five, as well as hosting promotional events with other entertainers, such as Adam West of television "Batman" fame. Len moved on briefly to broadcasting in the Los Angeles area, but soon was again beckoned to his Pennsylvania roots. In 1969, amid much fanfare, Len returned to "WarmLand" and WARM Radio, assuming the important 6 to 10 a.m. broadcast slot. It was at that time he was quickly proclaimed the "Morning Mayor of WarmLand." In 1971, Len and his family moved to Las Vegas, Nev., where he enjoyed broadcasting at radio stations KDWN and KENO, as well as co-hosting weekend night movies on local Las Vegas television. Len then moved into sales and eventually retired to enjoy the "WARM" weather of Las Vegas for the remainder of his life. Len is survived by his wife, Marian; his children, Ken Woloson and Debbie Gitelman and their spouses, Mary Woloson and Paul Gitelman, all of Las Vegas; his sister, Julia Wolosonovich; his brother and sister-in-law, Myron and Carol Woloson, all of Nanticoke; and his four grandchildren, Kristina, Kayla, Michael and Katherine. He is also survived by Tippy, a beagle mix and one of many dogs whom he had enjoyed (and who enjoyed him) during his lifetime. Len's final resting place will be the Southern Nevada Veterans Cemetery in Boulder City, Nev. Services will be private. The family has requested, in lieu of flowers, that donations be made to the Nathan Adelson Hospice of Southern Nevada or Keep Memory Alive, the foundation for the Lou Ruvo Alzheimer's Institute. If anyone would like to share any remembrances of Len or share a personal note to the family, you may e-mail those remembrances or personal notes to kwoloson@nevadafirm.com and they will be conveyed to his family. 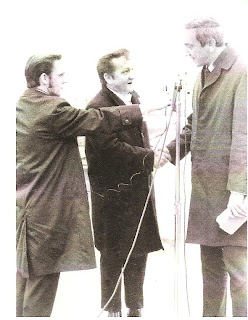 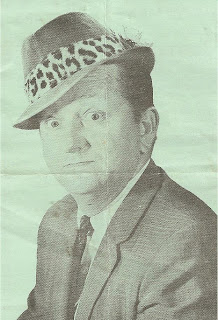 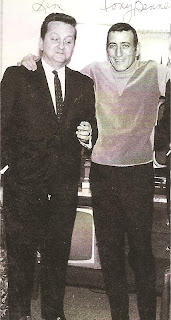 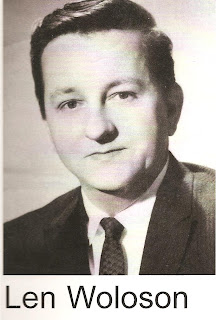 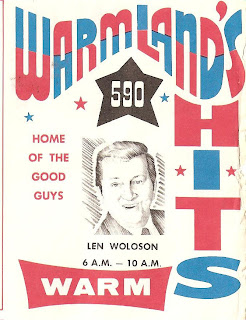 PHOTO INDEX: LEN WOLOSON WITH TONY BENNETT, A 1969 PROMOTIONAL PHOTO WHEN WOLOSON RETURNED TO WARM AS "THE MORNING MAYOR", WOLOSON BEING GREETED AT THE AIRPORT BY WARM STAFF, A 1970 WARM SURVEY SHEET AND A BIO PICTURE USED IN HIS BROADCAST CAREER.

Former WARM Radio employee Joe Middleton broke this news on the NEPA Radio Board about Len Woloson.
Len Woloson, a native of Nanticoke and an original member of the WARM "Sensational Seven", passed away in Las Vegas, NV. Len had been ill for a few yrs. and was under Hospice care.
Len joined WARM as the initial over nite personality known as" The All Night Satellite"from midnght till six in the orbit that clicks. Len joined WARM from WPTS in Pittston. Len later moved on to other markets, including Detroit where he worked at ABC's WXYZ, under the air name of Pat Murphy. Len returned to WARM as the Morning Mayor in 1970. He left WARM in Spring of 1972 just missing the Agnes Flood . In Vegas his first radio gig was with KENO. He worked at other Vegas outlets too. In addition he was used as a swingman on KMBC in L.A. Len is survived by his wife Micky and two children. Another wonderful talent silenced. May he rest in peace.

WARM Radio, operating as True Oldies Channel did a tribute to the one of the station's founding fathers. Brian Hughes produced it.

He was fond of saying he was "the winner of the Honeypot beautiful child" contest. Len Woloson it can be argued was a real beaut! I never met the man but felt I knew him from his on air antics at WARM Radio. He was a master of the radio drop ins where he'd use hundreds of sound effects records to make a gag run just right. Before computers and high tech, Woloson used his hands and guile to pull off a radio production each and every day. Even in his later years, he never seemed to lose the buoyancy that was a hallmark of his personality. On that wonderful radio documentary produced by WVIA TV, Woloson exclaimed, "We would've worked for free at WARM. If we had to, we'd work at the A&P and do it for nothing. But thank God we didn't have to do that". One by one, the building blocks of WARM are disappearing. But we have memories. And Len Woloson gave WARM listeners a ton, in Act I as The All Nite Satellite and again in Act II as the Morning Mayor.
At the end of his Morning Show, Woloson sometimes ended with a version of this song:

And finally, to the winner of the Honeypot Beautiful Child contest, a closing musical tribute.

PHOTO INDEX: BOB WOOD, AKA CHRISTOPHER SKY.
THE NAME GAME
Bob Wood came to the Mighty 590 in the early 70s loaded for bear. He was going to one of WARM's latest talent editions that would keep WARM competitive into the decade of the 70s. However, when Bob got to WARM, doing 3 to 7PM was a guy named Bob Woody. He had to change his name or else WARM might get the reputation for having a "wood-en" lineup. So Bob became Christopher Sky who soared week nights 7PM to Midnight.

Posted by David Yonki at 6:48 PM No comments: