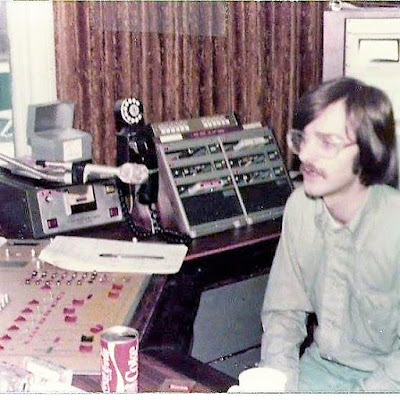 At WBAX. (Photo: Frank Cali FB page)
His real name was Frank Cali. But to radio listeners around here he was known as Chris Starr. He worked at WBAX in Wilkes Barre in the mid 70s and was known for his famous banter with afternoon newscasters Madeline Fitzgerald and David Kush.
His time at WEJJL n Scranton was legend as well as his stint at The Mighty 590. Weekend News anchor at WNEP Tv, Andy Palumbo had this remembrance on his blog. Here it is as well as the link to Palumbo's site.
Frank Cali started working at WARM maybe a year after I did, in the very early 80's. Frank, under the name of Chris O'Brien, did the overnight shift at first. Yes, this was the time when real radio stations had real live people working around the clock. It was called "full service radio."
I was the evening news person at the time, and I'd hang around after my shift ended at 11:30 PM, just shooting the bull with Chris for hours, hearing some old stories and learning about the business. He loved radio. Let me repeat: Chris loved radio. Before his arrival at WARM, Chris programmed a few radio stations in the market. I will never forget his advice. Chris believed radio programming wasn't all that difficult. All you really had to know was "shut up and play the hits." Of course, it was a little more than that. He had one odd accomplishment. It seems every station Chris joined, excluding WARM, had a polka show, and he always canceled it.
When Chris was "between jobs," he borrowed my typewriter to bang out resumes. I'd drop it off at whatever place he was renting and pick it up a few days later.
Chris was what we in the business call a "floater." He changed jobs frequently. It's usually viewed as a negative. I didn't see it that way. He was just constantly looking for something new, a challenge. Chris might have been the original Dr. Johnny Fever. I remember when he arrived at WARM, he needed a card in front of him to remember his new air name and the station's call letters.
One of my favorite stories was when Chris worked at a radio station with big windows in the studio, looking out onto a used car lot next door, run by a shady operator. As Chris was talking on the air, he watched the used car lot owner get punched in the face by an angry customer. Yes, I know assault isn't funny, but even after all these years, I still think of the way Chris told the story, and I can get a good laugh out of it.
We stayed in touch long after the WARM days. He hired me to work with him at WKRZ AM 1340 in Wilkes-Barre. I almost jumped, but WARM offered me more hours as a counter. I stayed. We reconnected a few years back, going out to lunch a few times. It was good to talk with an old friend. Chris, and I always called him that rather than his given name (he didn't mind), collected old television memorabilia. Out of privacy and security concerns, I won't give the list of everything I saw in his most impressive collection, but there was a chair from Al Bundy's "Married with Children" shoe store, one of Johnny Carson's coffee mugs, some of Soupy Sales' old cancelled checks and contracts. plus tons of 3 Stooges stuff. He was friends with cartoon voices, including June Foray, who brought Rocky the Squirrel to life. Chris knew Moe Howard's daughter. He had several autographs of the major movers and shakers from his time at the Voice of America in Washington.
There were plenty of health problems over the years, and that made me sad. He had a lot left to give. Chris used to live in a high rise a few miles from my house. Even though he had moved, I'd pass the high rise and say to myself, "I have to see how he's doing." The road to hell is paved with good intentions.
I'm sorry. Frank Cali, Chris Starr, Chris O'Brien died Friday night. I lost a teacher. I lost a friend.
https://andypalumbo.blogspot.com/search?q=Frank+Cali
Posted by David Yonki at 3:32 PM No comments:

As we all in WARMland and America struggle with affordable health care, here's a story involving WARM that tells us health insurance, medical coverage and illness could fell a family's bank account. Even a child's.
In this story from The Tribune, WARM Radio replenished the bank account of a youngster whose father was trying to get better. It involved an afternoon WARM Newsman Gordon Weise and John Hancock. 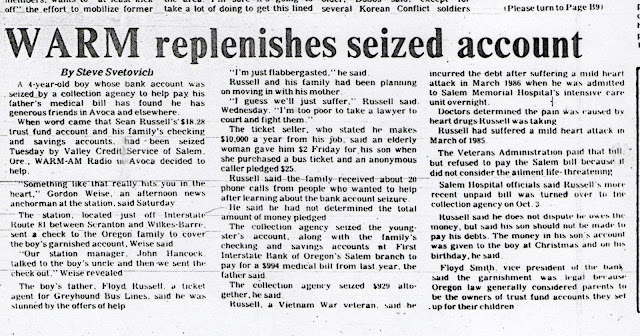 Posted by David Yonki at 3:32 PM No comments:

TERRY McNULTY, THE BIG FELLA PROFILED IN THIS 1985 ARTICLE

Terry McNiulty was a WARM lifer. Arriving from WSCR, McNulty had a series of jobs at WARM. This March 1986 profile of McNulty pretty much said it all about his WARM persona. 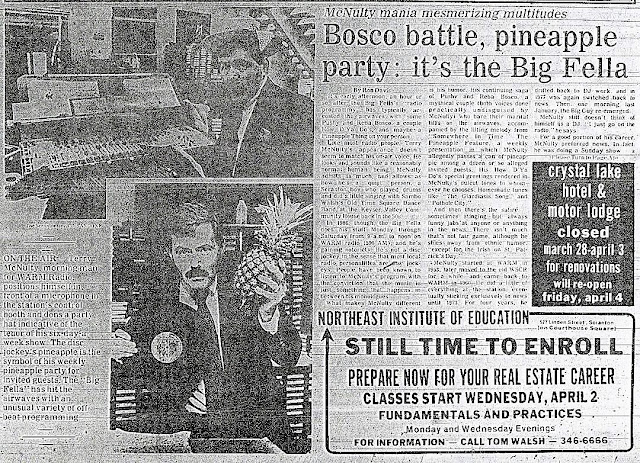 Posted by David Yonki at 3:32 PM No comments:

He came into this market mindful of the heritage of WARM. John Hancock arrived after a very turbulent time for the station. Hancock knew how much the station meant to the listeners as well as their Mighty 590 radio people. He fit right in but was very gracious to all who worked with him.
Hancock even bought into the Community efforts and promotions pioneered by his intrepid predecessors.
In this June 15th 1985 story from The Scranton Tribune, you see Hancock hovering for 59 hours and wait for it..raising over $5900 dollars for The Easter Seals. 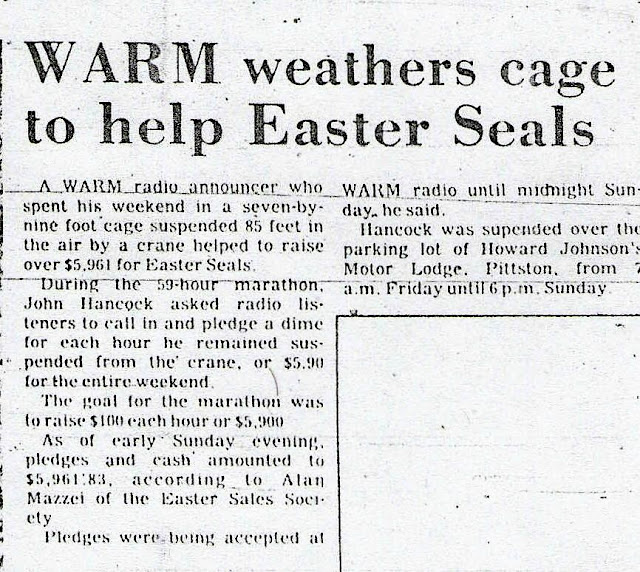 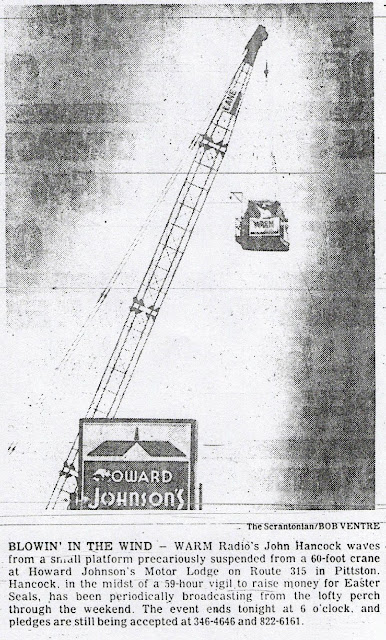 While all this was going on here was one of the hits WARM Radio was playing.
Posted by David Yonki at 3:31 PM No comments:

WARM, HARRY AND THE LOTTERY

By the mid 1980s, the Pennsylvania Lottery was a big business. WARM got in on the action along with their Morning Man Harry West with a lottery-license plate  contest. Check out this ad from November 21st, 1985. Notice that WARM was partnering with The Globe Store in handing out a very big Holiday Check. 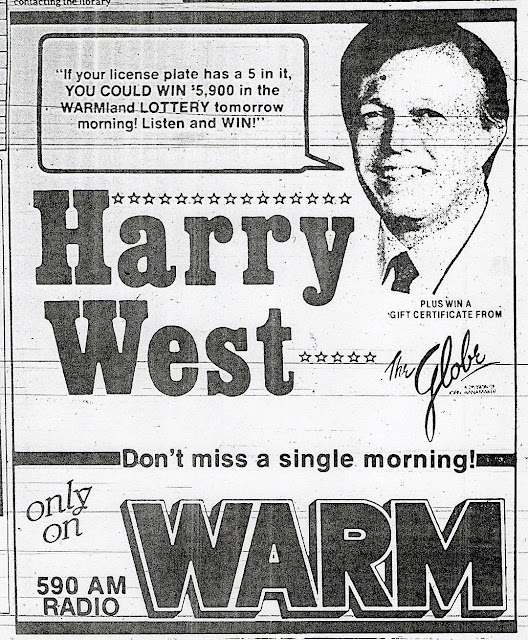 Posted by David Yonki at 3:31 PM No comments:

When Jim Drucker was an all night disc jockey on WARM, certain members of management were not happy when Drucker would talk about being a good person in the eyes of God.  Drucker didn't go over the line but there were some that felt he should not have been preaching the golden rule on the air.
In 1986 Jim Drucker returned to the airwaves but this time talking about his religion as well as the history of his church. Here's an article from The Scrantonian from September 6th, 1987. 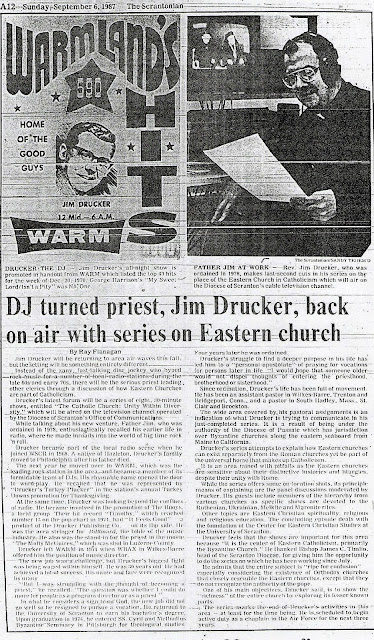 Posted by David Yonki at 3:31 PM No comments: