WHERE THE MAGIC CAME FROM

A great friend of mine,  Father Thomas Carten used to say the only thing that mattered in radio was what came out of that speaker. Carten was revolutionary in his right founding the RADIO HOME VISITOR, a reading service for the Visually Handicapped on WRKC FM Radio. After 41 years the program is still on the air.
WARM Radio, the mighty 590 brought you the hits, the news and contests. But it all stemmed from a radio board that is still working. Engineer Ron Schacht sent us three photos of the storied WARM brodcast board that legends sat behind and millions heard since it was installed in 1959.

Here it is: the RCA BC 3C
Photos are by Ron Schacht 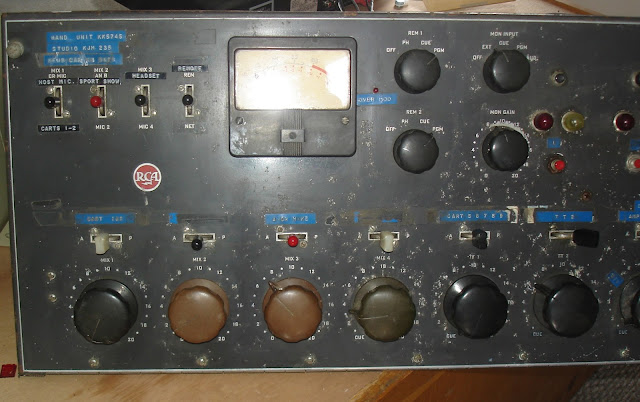 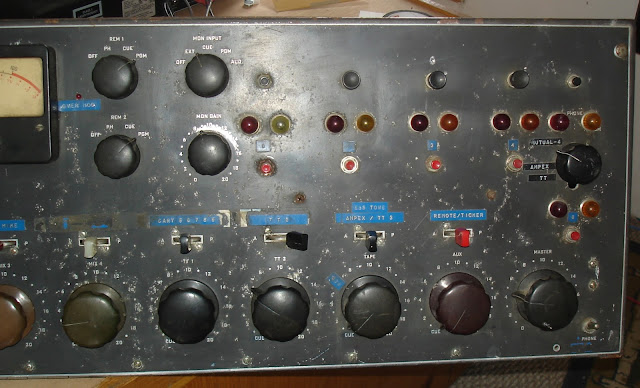 Ron still has the board and even set it up with a couple of turntables. He says it’s working just fine. He says that 2 years ago, one of the radio stations that he was working for at the time was celebrating their 80th birthday. He set up a studio in an empty storefront at a Mall and  used the WARM board, turntables, mikes, cart machines, etc. He set up a Marti shot back to the main studio. For the entire week, from 5am to 9pm, they ran from the mall studio playing carts, 45's and lp's using the WARM board. They were the top 40 station of the 50's through the 70's and they brought a lot of the old jocks back, one still works there full time. It was a lot of fun seeing records go round and round again and having the old tube gear on the air playing the music that that board played 50 years ago.
Too bad the current WARM was not afforded that recognition on its 75th anniversary.
Posted by David Yonki at 11:55 AM No comments:

The evolution of WARM continues in 1949 when the Scranton Radio Corporation starts to take command from the Union Broadcasting Company. Here's that article from April 12th, 1949. 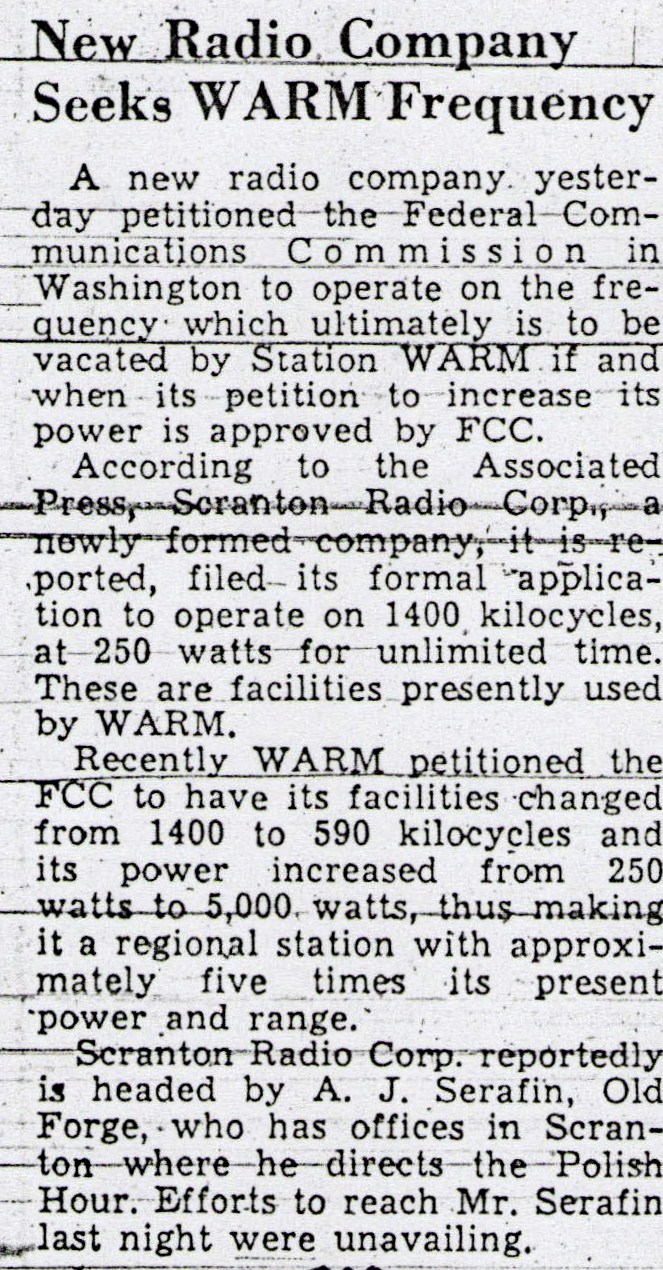 THE FCC SPEAKS AND GIVES ITS APPROVAL

The next day the newspapers released the approval by the FCC. 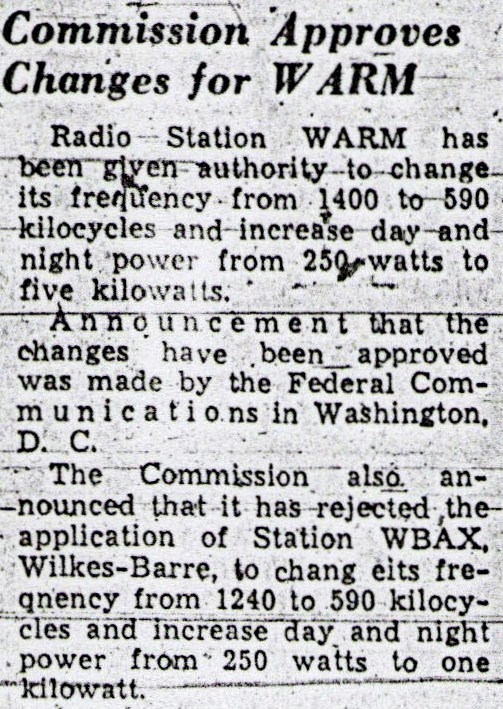 The year was 1949 and WARM Radio wanted to apply for a change on the radio dial from the 1400s down to 590 AM. If you look at the story published on March 28th, you'll see that WBAX in Wilkes Barre applied for the very same change but WARM eventually prevailed. 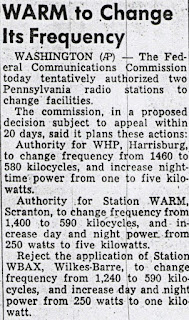 Back in the late 1940s, frequency modulation was just a little blip on the commercial radio radar. WARM Radio though put on the very first FM station in the area. Here is that article:

WARM PROMOTIONAL ADS IN THE NEWSPAPER

If you ever took a look at those old radio listings in the paper, you could tell that it was very tough to get lost in the shuffle. What WARM did was place bigger ads in those radio listing to get people to tune in. This double header ad had WARM's network affiliation listed as well as a weekly program called "Marriage For The Millions" a weekly program heard on Tuesday night.

When WARM was just getting its footing, the General Manager Martin Memolo wanted to get a facility to house a tower. Here are two articles from The Scranton papers that tell you the story of how the station got the property for just a buck. 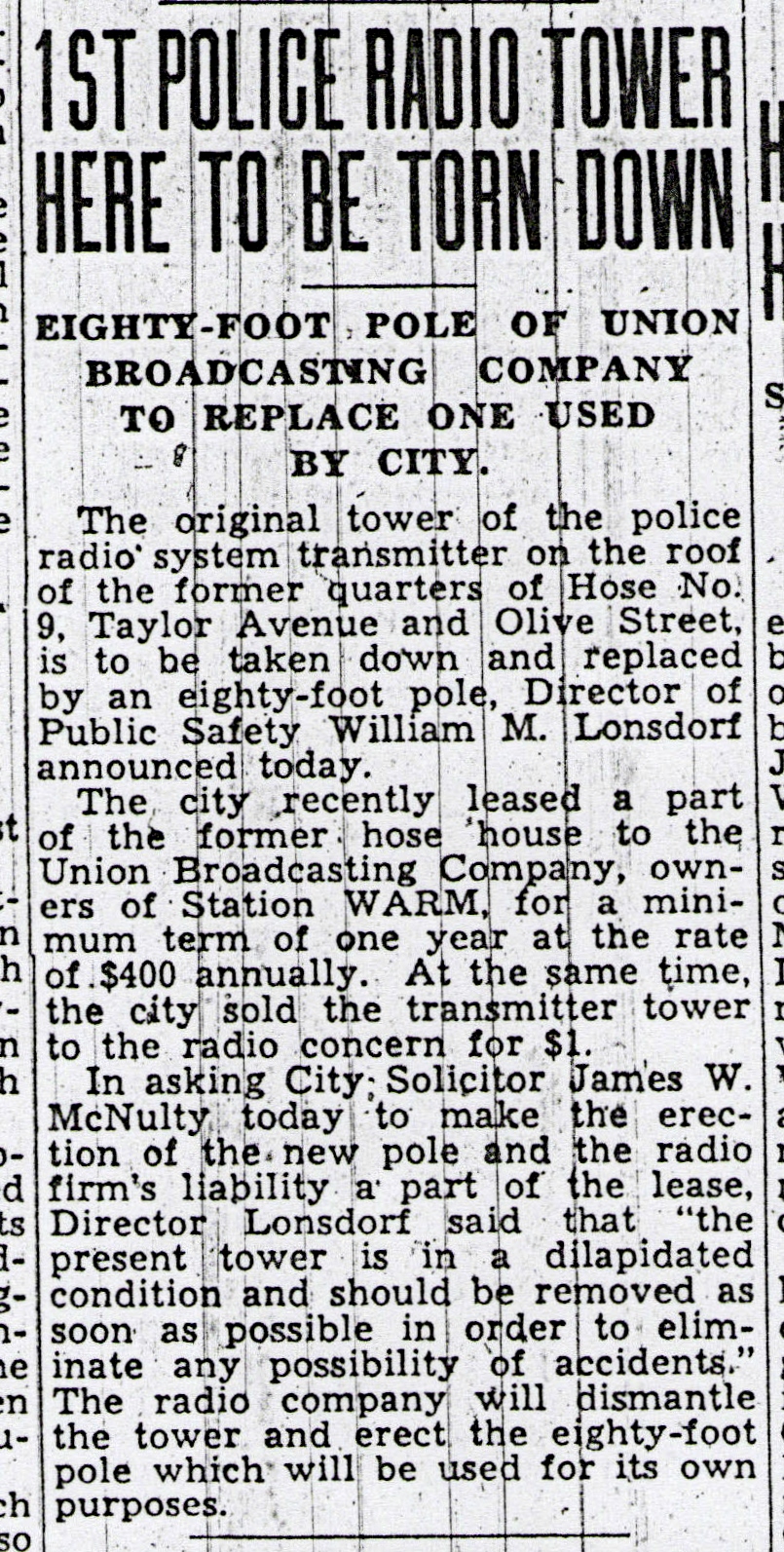 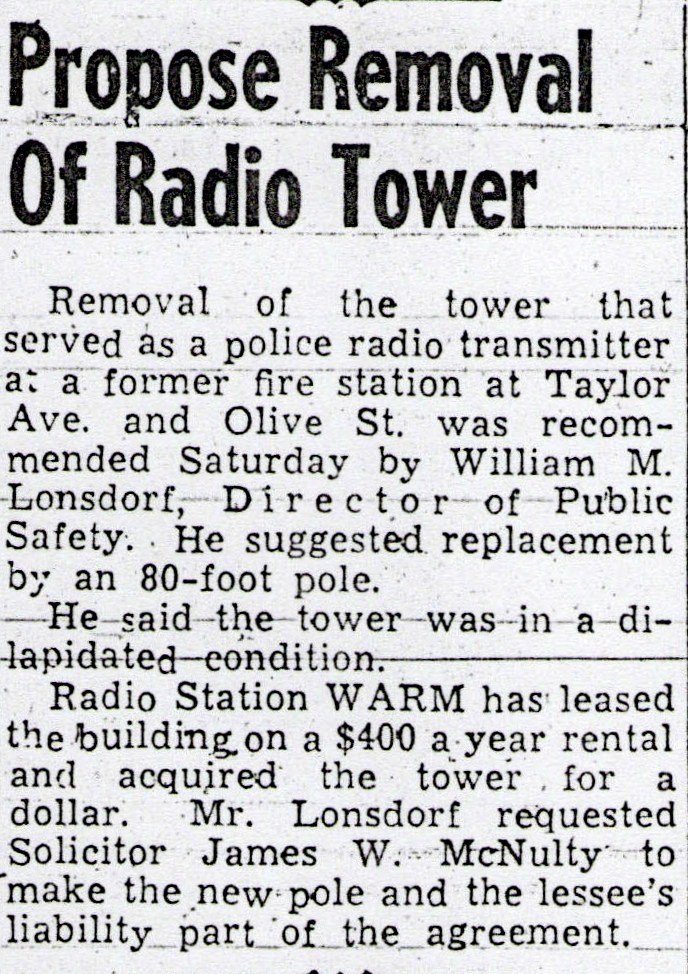 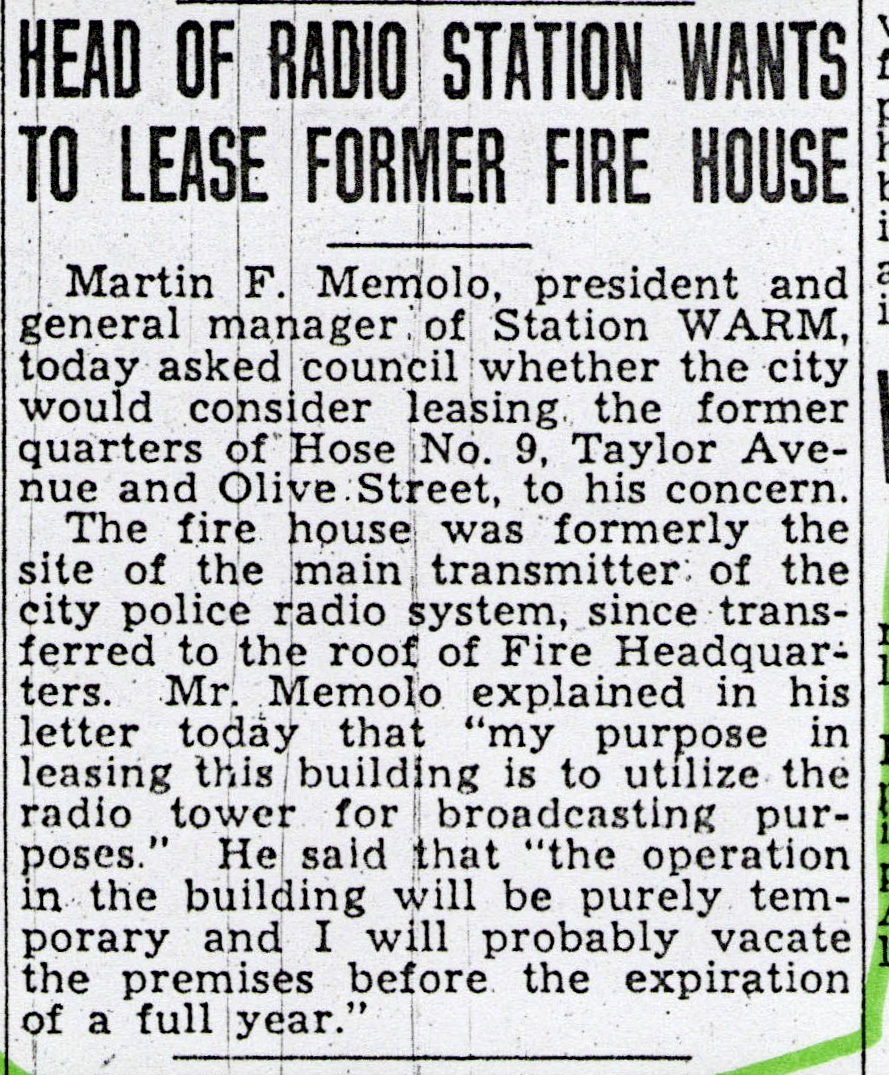 Years ago you'd hear about Radio and TV strikes. The very fact that there was such a thing is amazing in this era of no unions pretty much anywhere in America. WARM Radio was not immune to disagreements when the station was trying to make its mark in the 1940s. This is an article from June 4th, 1947 regarding a union dispute. Here is the article, and a retype of it follows.

The U.S. Conciliation Service will be asked to step into the dispute involving radio stations WARM and the American Communications Association, CIO, in a last effort to avert a threatened strike, it was learned yesterday.
W.A. Lamey, Vice President Northeastern Branch ACE, disclosed in Philadelphia that with national union officials sanction, he would as the Conciliation Service “to move in’.
If the radio station does not agree to this, Mr. Lamey said a 24 hour notice of termination of the existing contract would be given and a walkout of four radio technicians will take place.
Three separate sessions have been held since April 30th in an effort to reach agreement with the union’s request for increase in wages. Mr. Lamey said “station officials flatly refused any demands.
Martin Memelo, President of WARM, is credited with the statements that the four technicians covered by the contract receive 60 dollars per week. The union is demanding $78.00.
“This demand”,  Memelo said “is excessive and almost twice as much as unorganized stations in the region are required to pay”.
The union is asking the company to grant the same wage scales which are in effect at stations WBRE and WBAX in Wilkes Barre, Mr. Lamed said.
The union official said it had been  a practice in the past for WARM to agree to wage scales negotiated at the Wilkes Barre stations. Mr. Memolo denied his station had the same contract terms as the Wilkes Barre stations.
We are competition with other stations that are not organized and we have to look after our own interests. Basically are differences are based on the unions wage demands Mr. Memolo added.
Letters dispatched by the ACA reaching local unions yesterday stated that “there is a possibility we have to resort to strike action to receive our demands”.
Support of these units was asked.
Officials of the ACA also revealed they are conducting an organization drive among engineers and announcers at radio station WGBI Scranton.

Posted by David Yonki at 1:43 PM No comments: 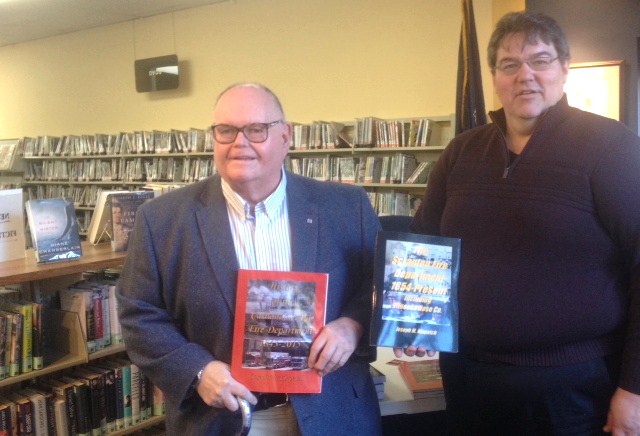 Your blog editor and Joe Klapatch at the Carbondale Library.

Last weekend we made the trek to the Carbondale Public Library to meet and greet Joe Klapatch. Joe who is a radio veteran of WARM, WARD, WBQW and many other frequencies has penned two books on the histories of the Carbondale and Scranton Fire Departments. The "History of the Carbondale PA Fire Department 1843-2015" and “The Scranton Fire Company History” can be purchased at the Carbondale Public Library, Lackawanna Historical Society in Scranton and the Library Express in the Steamtown Mall. The book is $22.00 and is very good. The book on Scranton is $35.00 and it is an impressive tome.
Joe is an old radio veteran and has contributed many articles to this blog outlining the early history of WARM.
Posted by David Yonki at 1:34 PM 1 comment: