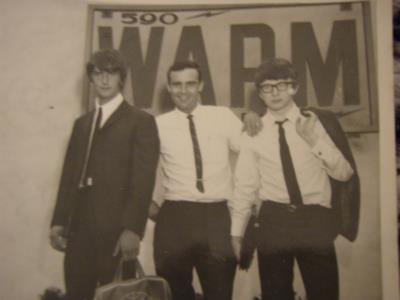 
One of the "perks" WARMland personalities had was the opportunity to meet the rock and roll stars of the era. One of the guys who was very connected to the music scene at WARM was Tom Woods. Woods was the Music Director of the station and along with Program Director George Gilbert had a huge say in picking the records heard on the Mighty 590.
Facebook has given former members of the WARM Sensational 7 the opportunity to share their memories. Here's one from Tom Woods' Facebook page regarding a visit from Peter and Gordon.
Here's a blast from the past...This is me with Peter and Gorden in 1965 just as they arrived from England for WARM DAY at Rocky Glenn Park. Sadly Gorden passed away in July of 2009. Gorden Waller is the one with glasses. This was their first time in the United States. Their big hit.."A World Without Love".
One of the hit songs Peter and Gordon had was actually by Paul McCartney and John Lennon. 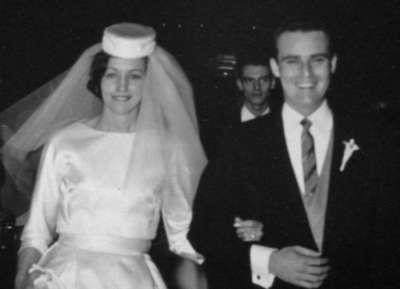 Tom and Fran Woods on their Wedding Day in 1964. (Photo: Facebook).


This week former WARM Sensational 7 member Tom Woods posted a photo on Facebook of his wife Fran and Tom on their wedding day in 1964. Tom and his wife have been together for 49 years now. Tom got married when he was in the midst of a stored career on WARM.
What happens when a well known disc jockey ties the knot at the number 1 radio station in the market? You do what other people do......just get on it with and do what other people did at the time.
Except though that on Tom and Fran’s big day, George Gilbert who was on the air, did updates as to what was going on. Gilbert detailed the time of the church service, the reception and a few other things WARM listeners might have been interested in. WARM’s Terry McNulty was in the wedding party and Tom tells us that at the time, all of the WARM on air personalities were married.
The wedding was held at St. Mary’s Church in Plymouth, now All Saints Church and from all accounts that day was a successful launching pad for the 49 year old marriage. Tom is long remembered for his 6 to 9PM stint as a WARM personality before moving on to WTOP in Washington, D.C.
He is currently in semi retirement. The man with the good looks and dulcet tones keeps busy doing local TV commercials for various businesses. He is seen on TV doing ads for Green Briar Village and the long time married man has a new client he’s representing on TV. WARMlanders are you ready for this? Tom is is the spokesperson for “All About Singles" in one of their TV ads. What better spokesperson than a guy who is closing in on a Golden Anniversary. To Fran and Tom…many more.
Posted by David Yonki at 5:51 PM 20 comments:

JUST A “GUY” PASSING THROUGH


The headline on this 590 Mighty Memory is not intended to diminish people in radio passing through. As a matter of fact, it is a badge of honor to go from one radio station to another. That means you are more than a “one hit wonder” and someone who has real talent. One of the people who passed through the Mighty 590 was a legendary broadcaster from the area. Guy Randall ended his broadcast career at WARM. Randall worked at WARM from 1981 to about early 1984. Randall did a Sunday afternoon music show in addition to doing news reports when WARM was indeed the news leader in the area.
My first memories of Randall are vivid. When I was 9, I had a triple threat combination of the mumps, the measles and the chicken pox. I mean I had them all at once. And our family doctor quarantined me to my room. For company, I had my sister’s transistor radio and other than visits from my vaccinated family, that was it. One afternoon I heard a voice that really knocked me out but that voice was playing music my parents listened to. Tony Bennett, Frank Sinatra, Louie Armstrong, Judy Garland, Nancy Wilson, they were all people on the Ed Sullivan Show that I  as a young rock and roll fan, ignored.  But the announcer made the music interesting. And his name was Guy Randall. His show was on from 2pm to 6pm on WILK and his style was easy and deliberate. I wound up listening because his show led into Phillies baseball.
Later on when I was in college, I did a part time stint as an intern at WBRE AM and FM. At that time, the dual station, owned by the Baltimore family was All News. It was part of NBC Radio’s national all news radio commitment. There was a network feed for 40 minutes but the other 20 had to be made up by the local affiliates. Guy’s role was to be the afternoon anchor, prior to that, at 10 am he’d go out and cover stories. On my first day I got to ride with him to a fire. As a newsman, Guy got the sound, the facts, the story and then filed it right away. During the ’76 primary campaign Randall coordinated the radio coverage for WBRE. The Pennsylvania primary was very competitive. Jimmy Carter visited, Morris Udall, so many surrogates. Guy made sure we had sound on all of them.
Guy would always come into work carrying a few pens (you could count on him for a spare one if you needed it) and a brown bag. That brown bag sat on his desk until after the 2pm news and then he’d dig in. There was always a sandwich on rye and an orange. When it was a tough day, he’d saunter on down the hall and buy a PayDay. But then he told me he switched to M and M’s because the nuts would get in his teeth and hinder his delivery. When I asked him why he got into broadcasting, he simply said, “I tried it, they liked me, my  voice and Roy Morgan (owner of WILK) gave me a break." His olive skin and graying slicked back hair was conducive for TV but Guy never made that leap.
When WBRE and NBC ended their all news association, Guy wound up at WARM. He covered a few stories for WARM and was put into service for an entire weekend in September of 1982 when George Banks went on his rampage. Guy is best remembered at WARM not for the way he arrived but for how he left. He, along with many fine broadcasters were fired on a day referred to by WARM historians as “Axe Wednesday”.
After WARM, he was employed by the sports department of King's College and Pocono Downs Racetrack. He also served as Chairman of Council in Larksville Borough, his hometown for many years. He was a member of  St. John the Baptist Roman Catholic Church.
When Guy passed away, there were a few mentions of his radio career in his obituary. But for many of us who knew and worked with him, it was easy to fill in the lines with anecdotes and remembrances of a man who was always ready to help a fellow news traveler.
WARM Radio only had Guy Randall’s multi talented services for just a few years. But in that short time, he proved to be more than just another “guy” passing through. He died in October of 2001 but when WARM fans get together, they recall the dulcet tones of Guy Randall, a great voice, good newsman and good guy.
Posted by David Yonki at 1:38 PM 6 comments:

THE PHILLIES AND WARM


Opening Day in Major League baseball is a special time of year. Especially in WARMland where the cold winters dominated the months of December, January, February and in some cases even March. A sure sign of spring was the sound of spring training games from Clearwater, Florida where the Phils always sounded so good on WARM.
The Mighty 590 didn’t always have Major League baseball though. The Phillies were on WILK Radio in the 1960 all the way into the early 70s. WILK then wanted to clear the decks for its Top 40 format. The mantle of the Phils was taken up by WBRE AM n the 70s. Then when WBRE went All News in 1975, the Phillies joined the Mighty 590. It was a majestic partnership that continued until the early part of the 21st century.
WARM was always the place for Major League baseball. The game was usually preceded by the Ron Allen Sportsline and then morning updates were provided on the drive time A.M. shows the next morning. When WARM switched over to an Oldies Format in the mid 2000s, Yankee baseball was broadcast on WARM for about two years. But budget issues and staffing availability made it impossible for WARM to carry Major League Baseball.
However, despite that, we do have our memories! As pitchers and catchers start to play for real, it is with fond memories that we remember the role WARM Radio played in bringing sports fans Phillies baseball.
Posted by David Yonki at 1:05 PM 6 comments: