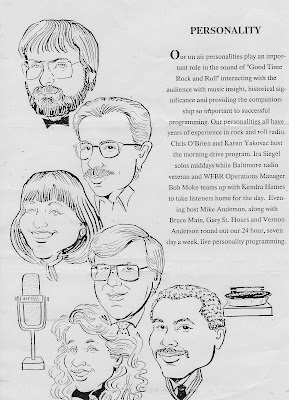 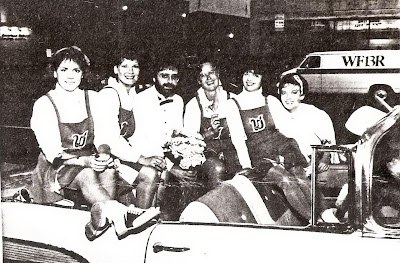 PHOTO INDEX: FORMER WARM JOCK CHRIS STARR IN AN AD FOR HIS STATION IN BALTIMORE AND IN A STATION PROMOTION SURROUNDED BY A BEVY OF BEAUTIES.
CHRIS STARR RESPONDS
Our last WARM Mighty Memory featured Chris Starr who used the name Chris O'Brien from WARM. We heard from him and posted this response from him. In his response he talks about his days and interactions at WARM.
Jim Gannon was one of the nicest people to know. Maybe someone will see your post and he'll get in touch.
I remember by first jock meeting at WARM, the guys told me to shut up and just listen, because it was all a waste of time. Ron Allen after the meeting got under way and looked at me and said "Chris, you don't know this place was so screwed up do you?"
When I was a PD at WEJL and then WSCR and later WSCR (13 Q) the our favorite The Woody Guy, he told us that WARM was a "Well oiled machine" That wasn't true. There were plenty of Friday's nights when there wasn't even a jock schedule placed up for the weekend. We call to call to find out what the air shifts were.
So, after BAX, I went to WICK with Woody, then WEJL, I was PD there, then to WSCR with about 6 or 7 other EJL staff members including Jack Griswold. I coined the call letters "Why Even Jack Left" LOL.
So, after WARM, I went to Maryland, guess I'm one of the "lucky" few to make it to a major market, then Voice of America. That place is huge. Had people there who used to work for the BBC, Good Morning America, we had 2 of Larry Kings ex engineers (they hated him). Guys from The Tonight Show crew, Mike Douglas, you name it. The Voice America was considered the final step up. A federal Government job, great retirement and so on.
My final job in DC was.....ready? Working for Present Clinton and Air Force One. Can't say mush about that because it has a high security clearance and Nation Security issues. THAT was an amazing job. I did get to talk to Hillary once, her Grandfather worked with my Uncle in the old silk mill in Scranton years ago.
So, it was an interesting career. I also wrote for some national Magazine, was Editor-in-Chief of The W.C. Fields Magazine for the Fields family. We worked with A&E on the Fields biography. If you ever see it, look for me and my real name on the credits. I go them just about everyone to interview for the show. When they first called me, they asked if Fields really drank. So, they had no idea.
Jerry Heller was also very nice to work with at WARM. Ron Allen was always kind and considerate to me as well. Terry, I only worked with maybe twice, so I never got a chance to know him well. But he was a true professional and good to work with. It's so sad to see that so many of them have passed away.

They took me and bought me 20 tuxedo's for a promotion when a limo driver would take me around Baltimore. I'd go into restaurants, pick up peoples checks and give them money. I had thousands on me each day. I couldn't believe it. When they took me for the tux, there were 5 promotion girls that worked there. I asked "Do I just bring the tux's back when I done?" they said "No! there yours!!!". That was a shocker. I was used to Scranton/Wilkes-Barre, where everything was a trade out. This station at the time was owned at John Gambling "Gamblin with Gamblin from WOR in New York. I'd work 4 hours a day and was home my 10:30 am ...amazing. 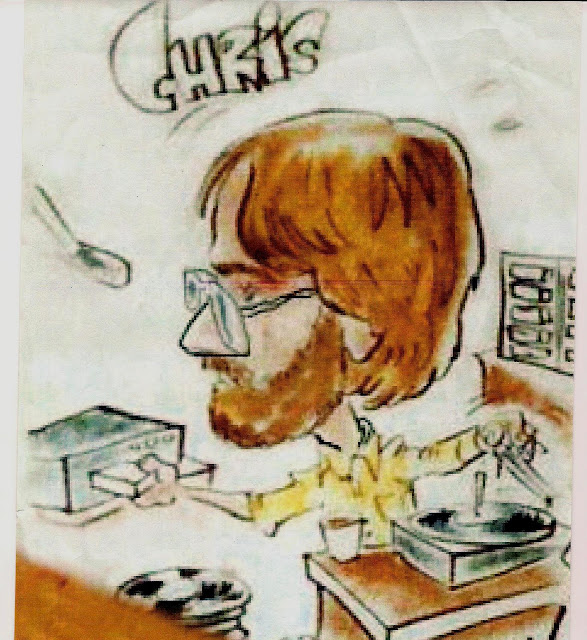 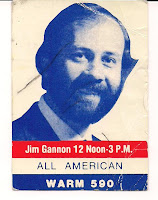 
THE BOYS FROM ‘BAX


WARM Radio very rarely wooed people away from other stations in the 1960s. True Terry McNulty came from WSCR, Tommy Woods from WNAK and Joey Shaver from WBAX but it was a given that if a new personality came from out of town it was from another city. In the mid 70s WARM started recruiting more aggressively locally. Around 1977 WARM went jock shopping at WBAX. In the mid 70s after Jim Ward left the station to start WARD, the Merv Griffin group still owned the station. They put an aggressive campaign to market themselves as a top 40 station. They featured twenty twenty news and had 6 disc jockeys who did 4 hour shifts.
Jim Gannon was known as Dale Denver on WBAX. Starting at 2am and ending at 6, Denver was the all night disc jockey who kept on moving up when people moved on. He went to WARM in the late seventies doing all nights, then afternoons. In the early 80s when WARM had Bill Kimball as a Program Director, it was decided that there would be tandem shows. Gannon was paired with Harry West in the morning. West who always was his own act was not happy. Gannon gamely tried to carry on in the mix but it just wasn’t clicking. After Kimball went on his way. Gannon did afternoon shifts.
Chris O’Brien came to WARM after spending a few years doing drive time on WBAX. He was best known as Chris Starr and was mischievous. His double ententes with then news woman Madeline Fitzgerald were way ahead of the Howard Stern Robin Quivers talk. Starr and Fitzgerald never went over the line..much and jelled well. O’Brien went over to WARM doing night and drive time. O’Brien later worked at WEJL AM which I think might have been his last radio gig in this area.
I was on my first day on an internship from King’s College when morning man Rick Walker got into an argument with a pompous GM named Dick Booth. I was talking to Walker when Booth made a smart remark and its was on. Walker left the building. I felt horrible because I thought I precipitated the firing. The Receptionist Lenore Brace later told me this was brewing long before I got there. (She and Starr later married). Walker wound up at WARM as Don DelVechio doing 10am to 2pm. Ron Allen gave him his name due to the popularity of a long gone, little remembered detective show on ABC.
Keaton one of my readers send me photos that his mom copied. He writes, "My late Mother made copies of them for me from Jim Gannon who was working with her about 10 years ago at a telemarking company in the old Scranton Dry Company. Gannon was close friends with Chris O'Brien and apparently had kept in touch over the years. They both had worked at the old WBAX. When Chris O'Brien left WARM in the 80's, he went to WFBR Baltimore and did mornings,later worked at WQSR Baltimore and finally at The Voice of America in Washington, DC. Gannon worked at WDSL I think it was after WARM. Where they both are now, who knows?”
At last report DelVechio was on the Exeter Police Force.
EDITOR'S NOTE: Thanks to "Keaton" for the WARM memory and photos.
REVISED FOR CONTENT: Sunday Nov. 21st, 2010, 12:21PM Eastern Time.
Posted by David Yonki at 7:56 PM 2 comments: 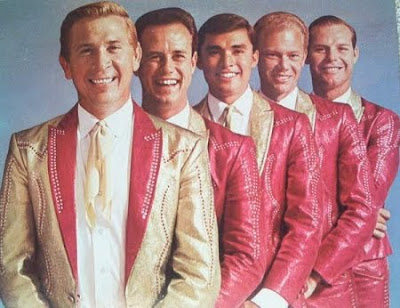 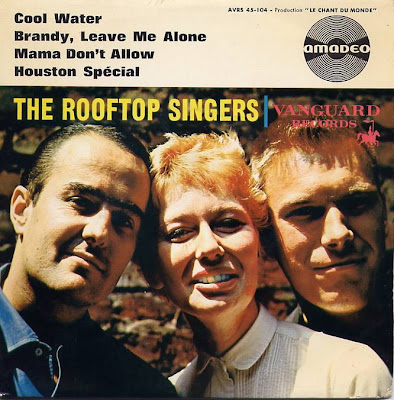 PHOTO INDEX: BUCK OWENS AND THE BUCAROOS AND THE ROOFTOP SINGERS.

In the 60s music was changing almost every month. If you take a look at a 1962 survey sheet from WARM you saw songs from standards singers Tony Bennett on it. Then there was the emergence of the “girl groups” and the “Wall of Sound” from Phil Spector. One of the biggest and popular arrivals on the scene was the era of folk music epitomized by the Rooftop Singers, Peter Paul and Mary and the Seekers. WARM decided to capitalize on this new folk wave by running a program ON Sunday night entitled “WARM Hootenanny”. It wasn’t anything that was in depth or probing. It was just an ancillary program filled with that type of music sponsored by a business and then promoted by WARM throughout the week. Not wanting to rock the cash cow boat WARM created with Top 40 and News and Information, the show was safely tucked away on a Sunday night sandwiched between the Stegmairer Oldies Show and the WARM public affairs block that ran at 11PM Sundays until signoff.
A few years later WARM also introduced a TOP Ten countdown of the Country Hits in the nation. Again, it was sponsored but not put in any place to change the outcome of their main format.
These two attempts were clear demonstrations that while being number 1 with a major share of audience. WARM had its ear to the ground trying to make sure they weren’t missing anything in the pop music field. This dalliance into niche broadcasting was shortlived since those Hootenanny hits and country songs crossed over into the regular top 40 rotation. But it is worth noting that WARM, even in the 60s was looking to make sure they kept themselves in the music game. According to my records and interviews with people, (albeit very sketchy) The Hootenanny Show ran from '62 to about late '63 and the WARM Country Countdown lasted about 6 months from January 1966 to about mid May).