WARM "LAND" MEETS DISNEY "WORLD"
Radio was a big player in the 90s when Walt Disney World in Florida allowed radio stations to broadcast from the gigantic, iconic theme park. Former WARM staffer Kelly Reed put this up on her Facebook page and with her permission we run this great WARMland 590 Mighty Memory. It involves hard work, persistence, a harmonica,  Miss America herself and the one and only Terry McNulty.
Reflecting on working at WARM, Magic 93, I was very blessed to meet some wonderful people and become friends with many talented dedicated broadcasters!! One of the best was Terry McNulty..He was brilliant and his range of characters was limitless. One of the great perks I had was finally getting the opportunity to do a live broadcast of our morning show at Disney World!! What fun.Rob Neyhard was our Producer on the trip(I believe!!), Joe Ohrin was our Hilarious Promotions guy... and Terry and I hosted the show at the Disney Boardwalk. Here we are with Miss America, (1996..yes..way back). 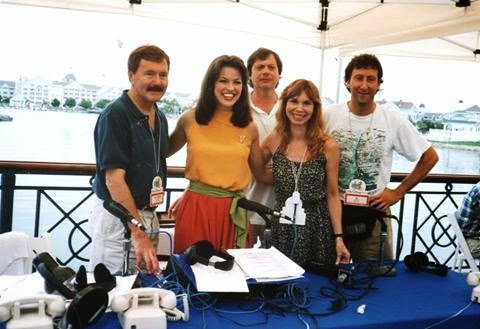 The late Terry McNulty, Shawntel Smith, (Miss America,) Rob Neyhard, Kelly Reed and Joe Orhrin.
Joe worked so hard that trip because all the obnoxious morning guys were scaring off Miss America and her people until I told Joe to work his "magic"(sorry!!) and tell her we were really very nice and she would have fun. His charm worked and when Terry found out it was her birthday and serenaded her on his favorite harmonica, she was delighted and our listeners loved it!!
As Joe Ohrin used to say (and for all I know is still saying it, "Everything is Ulysses!"
Posted by David Yonki at 2:21 PM No comments:

WARM STILL OFF THE AIR

Will WARM ever come back???? People are waiting to hear. Operative word here is.....hear! (Photo: BTR Network).
For the last eight weeks WARM, the Mighty 590 has been dark. No programming is coming from the signal. Station officials tell us that there are transmitter problems and they are being addressed.
Posted by David Yonki at 2:05 PM 2 comments: