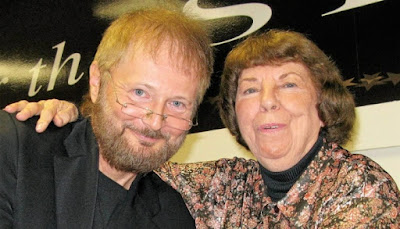 Louise and Beatledd (Photo: Citizen's Voice)
The late George Gilbert who programmed The Mighty 590 through the halcyon days of the 60s and 70s always used to say this about picking the top 40 every week. He said, "You could never go wrong with The Beatles."
Years later with WARM as a fond memory, the Beatles music still lives on.
This Friday there will be a concert at The  Kirby  featuring The Liverpool Legends. Hosted by Edd Raineri, aka Beatledd, the show looks to be a big hit. If you were a Beatles and WARM fan, this show is tailor made for you.
The band performs songs spanning the entire career of The Beatles and on through their solo years. With precise attention to every musical detail, along with costume changes, vintage instruments and special effects, Liverpool Legends will make you feel like you are watching the real thing!
They’ve performed with Denny Laine (Wings); former Beatle, Pete Best, and the Boston Pops. They’ve appeared on The Travel Channel’s “Beatlemania Britain” and headlined at “International Beatles Week” in Liverpool, England.
Also, nationally known comedian/impressionist, Jeff DeHart, will be coming in from NYC and taking the stage as “ED SULLIVAN”. A very good friend of fellow comedian, Bob Saget, Jeff DeHart is hilarious!
Tickets on sale at the Kirby box office; online at kirbycenter.org and charge by phone at 570-826-1100. 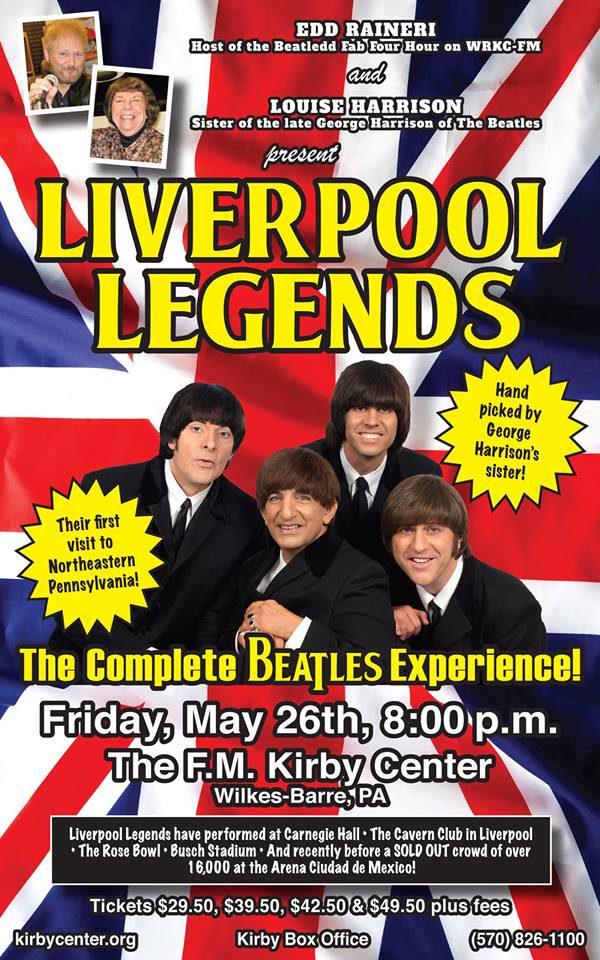 Posted by David Yonki at 6:31 PM No comments: 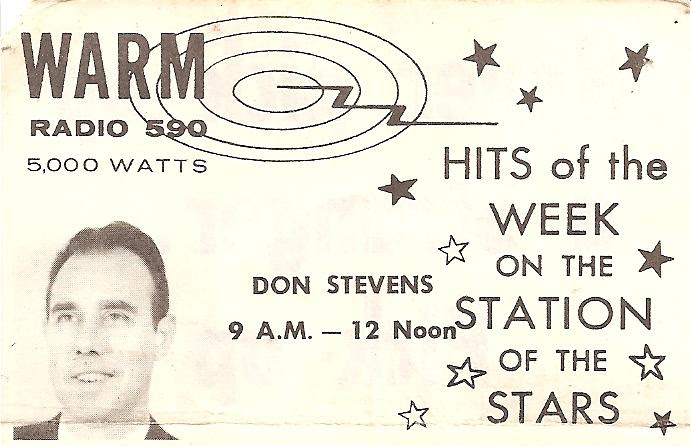 Don Stevens was one of the WARM Sensational 7 in the early 60s. Stevens held down the 9am to noon slot and after the 10:30 news ended, he'd open the mic and said, "Ladies and Gentlemen, this is The Don Stevens Show on The Mighty 590 and we're halfway home!"
This 590 FOREVER WARM blog is half way home. We started this site with the intent that we do 590 Mighty 590 memories.
Anyone who has anything they'd like to share, please contact me through this blog or e mail connected with this site.

WARM AND OZZIE AND HARRIET

Through the years when WARM was a pop radio icon, it played the music of Ricky Nelson, himself a huge early star of rock and roll. That stardom was due to a national TV show on ABC called "The Adventures of Ozzie and Harriett." Ozzie Nelson was a band leader from the 1930s with his wife being the singer. But Ozzie recognized the power of TV and got a deal with ABC that promoted his son Rick as a teen idol. Wisely  Ozzie also had Rick do standards too to meet the generational  divide.
But before there was TV, there was radio and WARM carried The Nelson family adventures every Friday night. Here's an ad courtesy of our friend Joe Klapatch. 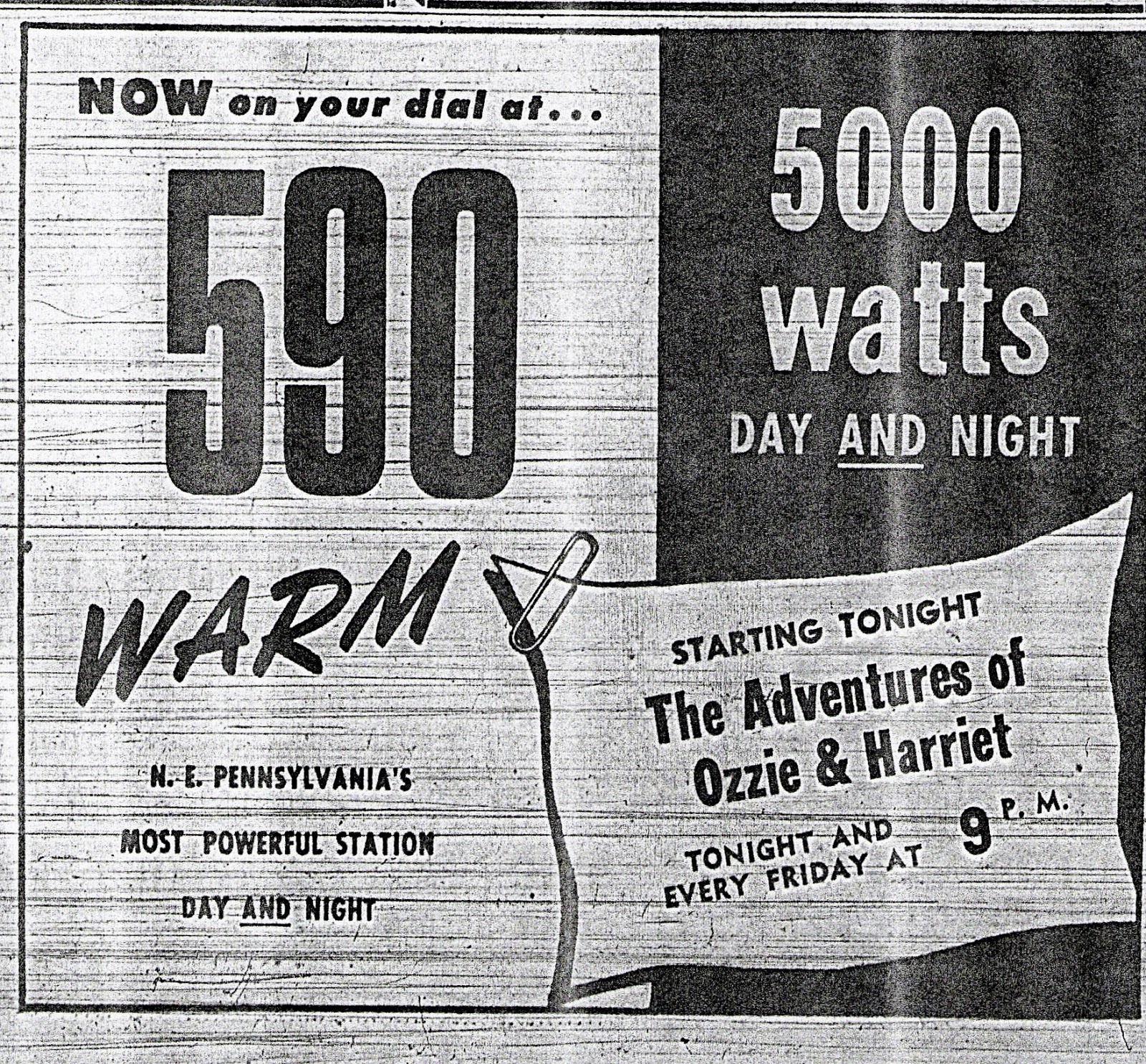 When WARM was broadcasting at the 590 frequency in the 1950s, the ramifications of atomic warfare were very close in the rear view mirror. This news article from June of 1952 tells us all we need to know about the Cold War in the early 50s and how radio played a key role in case the worse would happen.
This was dated from December 1952 and provided by our friend Joe Klapatch. The plan was involving other Scranton based stations if Civil Defense announced a national air raid. Keep in mind it was just under 10 years that the u.S. used the atomic bomb to end the war with Japan.

WARM Radio had a long running relationship with the folks at Pocono Drag Lodge. And advertising it on the back of WARM survey sheets was the norm, never the exception.

HEATING THINGS UP WITH A CAMPBELL'S SOUP BEACH TOWEL

Campbell's Soup is normally associated with comforting cold souls in rainy or dreary weather. It's a go to warm up meal. But WARM Radio in the 60s had a Campbell's Beach Towel promotion where for under 2 dollars you could score your own soup style beach towel. So if a young lady had a Bryan Hyland like bikini issue, this towel could cover that situation.
Posted by David Yonki at 11:40 AM No comments:

This WARM survey had The Young Rascals peaking at number one again with "Groovin". But two songs on that survey debuted in pretty high fashion. This usually is a good sign meaning that the song will be a "can't miss". Yes "Girls In Love" by Gary Lewis and The Playboys and "Yellow Balloon" by Yellow Balloon never made it to the Top Ten. The Lewis song entered at number 24, the Yellow Balloon song at #23. "Him Or Me" by Paul Revere debuted at number 18 and fared much better landing in the Top Ten.

During the week of May 19th, 1968 Robert Kennedy and Eugene McCarthy were preparing for a big debate leading up to the California primary. The nation was still mourning Dr. Martin Luther King. WARM was also covering the ongoing struggles in the Vietnam War. But despite that big news, the music played on.
Archie Bell and the Drells had the number one song with "Tighten Up",  Ray Stevens was urging us all to "Unwind" at number 22 and Engelbert Humperdink told us how difficult it was for "A Man Without Love" at #35.
Posted by David Yonki at 11:38 AM No comments:

This WARM survey from 1968 was pretty interesting. A very odd song by Esther and Abie, "Cinderella Rockeffella" was charting at #35. The Beach Boys were at #22 with "Friends" and "Mrs. Robinson" by Simon and Garfunkel was at #17 on the way to number 1.
Posted by David Yonki at 11:38 AM No comments:

WARM RADIO SONGS OF MAY

May  1967 was WARM at its peak. Tommy Woods was the Music Director and when you take a look at this survey sheet, you still see how Top 40 was still trying to shake out into one cohesive music unit. Charting at number 1 were the Young Rascals with "Groovin".
They were at the top, charting at #40 was none other than 50s music celebrity and former husband of both Elizabeth Taylor and Debbie Reynolds, Eddie Fisher with "Now I Know".
Posted by David Yonki at 11:38 AM No comments:

May 1969 was a tad less tumultuous than the previous year 1968. Richard Nixon was the new President and WARM Radio was sailing along being the dominant station in the market.
Two songs that stand out on the WARM chart of this week was the number 5 tune by Blood, Sweat and Tears which gave pop/rock music a blending of brass and rock.
Charting at number 15 were the Ventures with an instrumental from a new CBS TV show Hawaii 5-0.
Nearly fifty years later, the theme song is still top of mind as the new version of Hawaii 5-0 on CBS enters another season.
(This survey sheets also features a rare mistake. The #32 song was "Welcome Me Love" by The Brooklyn Bridge, not "Welcome My Love". )

WARM AND THE MUSIC OF MAY

May was always an exciting time at the Mighty 590. Summer was at hand and the music kept on playing.

In this May 1967 survey we had both Dean Martin on the charts along with of all people Frankie Laine. Oh sure, rock dominated but these two "standard" bearers had a respectable showing on this top 40 charts. Dean and Frankie were back to back at #21 and #22.
Posted by David Yonki at 2:20 PM No comments:

DID FREDDY CANNON COME TO YOUR WEDDING?
HE CAME TO WARM'S BOBBY DAY'S NUPTIALS

Bobby Day is known today as the Voice of the Wilkes Barre/Scranton Penguins Hockey Team. But he was a mainstay at WARM Radio for years. Bobby would be the guy on the air for fill ins and always had to work the WARM Christmas party shift.
Bobby also was a newscaster toward the end of the WARM Talk Radio era.
But back in the day, when Bobby tied the knot, Freddy "Boom Boom" Cannon was in his wedding party. 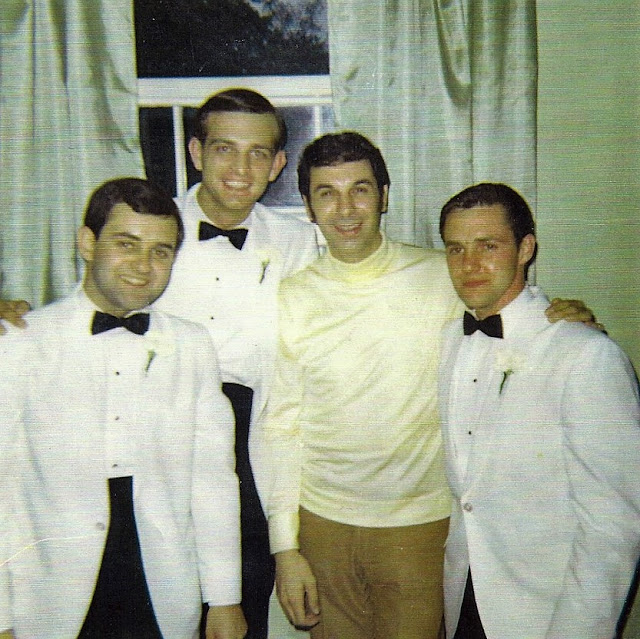 Budd O'Mailia, Bobby, Freddie Cannon and Joey Shaver are seen in the original photo on the big day. 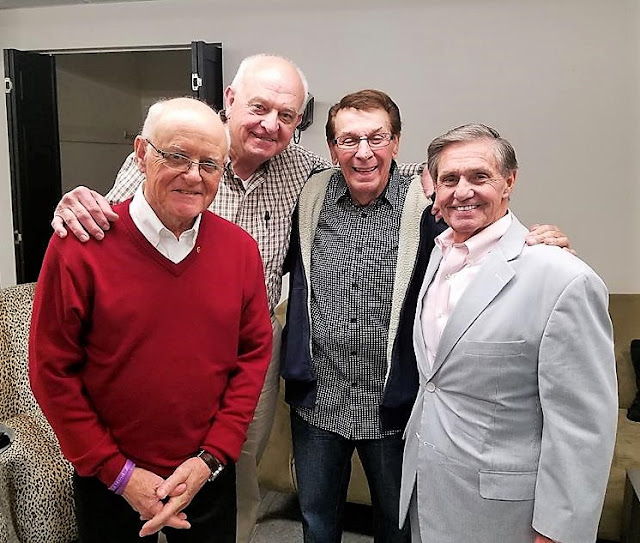 In May of this year, Freddy Cannon came back to the area to be part of the great Joe Nardone Shows at The Kirby. And the then and now photos were completed.
Posted by David Yonki at 2:19 PM No comments: