During the late 80s and early 90s James B. McNulty the former Mayor of Scranton did a daily talk show on WARM Radio. The program started at noon and McNulty did his take on the issues of the day. McNulty had served as Deputy Mayor of Scranton in the 70s and then became Mayor in 1982. He lost re-election in 1985, ran again in ’89 and after a loss joined the Mighty 590 during its hybrid format days.
WARM had the mainstay morning shows back then featuring music with Harry West and then later Terry McNulty. In the afternoon the station featured the Ron Allen Sports Line and then either Phillies baseball or Bruce Williams. McNulty held court every day as area WARMlanders who grew up to the beat of Rock and Roll now spoke to a member of their own generation on worldwide matters of concern. Sometimes McNulty took his show on the road especially during the nascent days of the Wilkes Barre Scranton Red Barons. 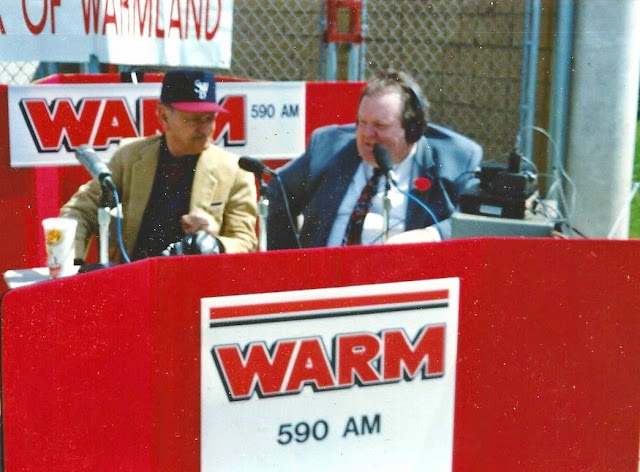 Here is the Mayor of WARMland (on the right) with the late State Representative Joe Wargo.
When WARM made a few changes McNulty retired his show and then went on to WYOU TV for a weekly Sunday Morning program. Jim McNulty was part of the history of the Mighty 590 and he is remembered fondly as a wealth of information as well as a booster for this region. Currently The Mayor is in a battle with colon cancer. This Friday February 27th there will be a celebration because Mr. McNulty hits 70! He’s actually 5 years younger than the radio station he was on. If you want to join his many friends, stop by at The Radisson March 27th.

Former Scranton Mayor James Barrett McNulty will be 70 on Feb. 27, and he’s planning to celebrate with as many of his friends as possible. Those friends are represented by a committee that includes, honorary chairmen U.S. Sen. Bob and Terese Casey, as well as Jimmy Barrett, Brenda Bistocchi, Brian Cali, Tracy Doherty, Eleanor Kerrigan, Todd O’Malley and Chuck Volpe, with an assist from Jim’s wife, Evie Rafalko McNulty, in planning “A Community Celebration of James Barrett McNulty’s 70th Birthday,” which is both a party, and a fundraiser. Jim is battling late stage colon cancer.
As any family fighting the cancer fight knows, there are many expenses beyond what insurance covers. Event organizers wanted to help raise funds to defray treatments costs. But Jim, Scranton’s mayor of hope, wants an upbeat gathering with all the people who have been with him during his life and political career. So, anyone who wishes to attend the party on Friday night, Feb. 27, at the Radisson at Lackawanna Station hotel will be admitted by a birthday card containing just wishes, and/or including any monetary gifts they have to help with treatment expenses.
Once inside the 6 to 9 p.m. event, Jim and his friends will enjoy hors d’oeuvres, appetizers and an open bar. There will be dancing to Kenny McGraw’s Brass and Ivory Orchestra, which is poised to add songs from Jim’s campaign days including “Rocky” and “The Best of Times” to its play list. Ever witty, eloquent and knowledgeable, Jim, who has a memory like a steel trap, will probably share some reminiscences and thoughts, as may some of his supporters — and there may be a video. The selection of the Radisson is special to Jim, who was mayor when the former train station opened as a hotel on New Year’s Eve, 1983. Jim was joined by his friend, then bishop of Scranton, the late Cardinal John J. O’Connor, in cutting the ribbon. While he only served one term as mayor, (1982-86) James Barrett McNulty, a lifelong Scranton enthusiast and ambassador, left his mark on the city from his days as Deputy Mayor in Mayor Gene Peters’ administration, to his years as a talk show host and political consultant.
Jim always emphasizes the positive, even through his illness, says Lackawanna County’s Recorder of Deeds, Evie, who married him in 1991, adding that Jim is looking forward to partying with his friends on his birthday. Evie also wanted to set the record straight on two things. First she is not 70, and on the contrary “much” younger than her husband. And, she shares in his hopeful attitude. The day after the party, “we’ll be planning his 71st,” she said, noting that she’s looking at having it on Scranton’s “showmobile which he got as deputy mayor.” It will, Evie said, be second only to the “highlight of his life -- his wedding.” Meanwhile Jim’s having his 70th his way, Thanks to a group led by Todd and Chuck, who are seeking sponsors to underwrite the admission by birthday card event. For details on underwriting and sponsorship, as well as donating to a fund being set up, call Todd’s office at 570-344-2667.
Posted by David Yonki at 10:55 AM No comments: