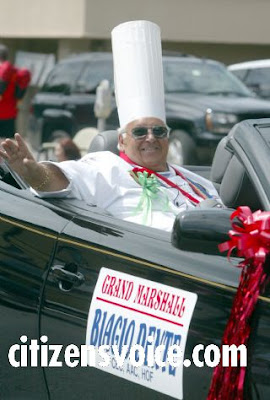 Before there was The Food Network, local residents had Biagio Dente. Every morning after the 8:30 news, like clockwork on the Mighty 590, WARM, Biagio Dente and WARM jocks, Harry West, Len Woloson, or Terry McNulty would verbally spar with the Pittston Chef.  Dente bought that time spot for years on WARM Radio to promote his business and in the process became part of those storied WARM years. Dente's famous sign off line was "Buon Appetito!!!" Dente passed away last week at the age of 78 in Florida.
I had met Mr. Dente a few times and they were memorable. Biagio was quite the renaissance man who could be seen on WVIA TV’s Ballroom Dancing, in the Pittston Tomato Festival, dropping off his Table Talk column to the Sunday Dispatch or just hanging out with his friends.
My fondest memory of Biagio was when we both attended a Crabfest at Our Lady of Victory Church in Harvey’s Lake. We both were there because of our association with Joey Shaver. I sat with Mr. Dente and his wife and he actually showed me the best way to eat and crack soft shell crabs. Our condolences go out to his family especially his son Blaise who is a fellow member of the Pittston Knights of Columbus with me. 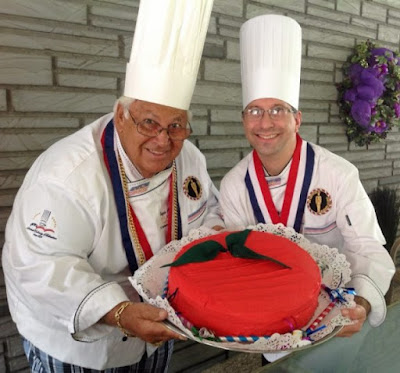 Biago and Blaise in a photo promoting the Festival of Tomatoes in his beloved Pittston.
He was a memorable man who will be fondly acknowledged for his very full life. Dente was part of the fabric of WARMland, just like the signature radio station he advertised on in its heyday.
Here are two reports from WNEP.com and his obituary from the local newspapers.

FROM WNEP.COM
A chef from Luzerne County who was one of the founders of Pittston’s annual Tomato Festival has died. Biagio Dente of Pittston died in Fort Meyers, Florida on December 14. He was the owner of Dente’s Catering Service and Dente’s Tent & Rental Company before retiring in 2015. Dente was a hall of fame inductee in the American Academy of Chefs. In addition to being a founding organizer of the Tomato Festival, he also served as grand marshal of the festival and is depicted on the Pittston Inspirational Mural. Biagio Dente was 78 years old. His funeral will be on December 28 at 11:30 a.m. at Our Lady of the Eucharist Parish, 535 N. Main St., Pittston.
FROM THE TIMES LEADER
Biagio A. Dente, 78, of Pittston, passed away in Fort Myers, Fla., on Dec. 14, 2016.
He was the son of the late Albert and Helen Dente. His wife is the former Emma Jean Pisano. Biagio was owner of Dente's Catering Service and Dente's Tent & Rental Company prior to his retirement in 2015.
Chef Biagio was a lifetime senior member of the American Culinary Federation. It is through this organization that he was a certified executive chef, a member of the American Academy of Chefs, (its prestigious honor society), and one of the only 50 chefs nationwide to be enshrined in the American Academy of Chefs Hall of Fame.
He was the recipient of many awards, honors and achievements, both on the local and national levels. He was a current charter member and past president of the American Culinary Federation, Professional Chefs of Northeastern Pennsylvania. He had recently served as its chapter chaplain and senior chefs chairperson. He was named its Chapter Chef of the Year in 1979. Biagio had also served as local president and state president, and on the board of directors, of the Pennsylvania Restaurant Association.
He was founding organizer of the Pittston Tomato Festival, past grand marshal of the Pittston Tomato Festival and one of the people portrayed in the Pittston Inspirational Mural. 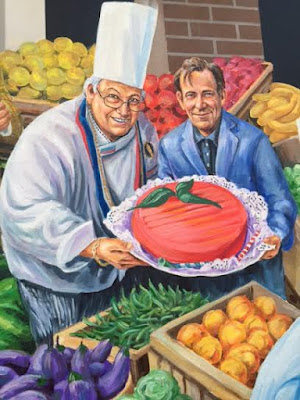 Aside from his professional organizations, Biagio was a parishioner of Our Lady of the Eucharist Parish, Pittston, where he was a daily communicant and Eucharistic Minister. He also served in the same capacities at his "winter" parish, St. John XXIII in Fort Myers, Fla. He was a fourth degree member of the President John F. Kennedy Council 372 & Assembly 948, Pittston. He was a ballroom dancer, member of the Wilkes-Barre Elks Club, and a member of Fox Hill Country Club.
He was preceded in death by his daughter, Elaine L. Dente, R.Ph. In addition to his wife, he is survived by his daughter, Suzanne and son-in-law, Oscar DeJesus; granddaughters, Alyvia Elaine and Alisa Rose, all from Kansas City, Kan.; his son, Blaise Alan Dente, of Pittston; and several nephews, nieces, and cousins.
The funeral will be on Wednesday, Dec. 28, 2016, with a Mass of Christian Burial at 11:30 a.m. in Our Lady of the Eucharist Parish, 535 N. Main St., Pittston. Friends may call at the church from 9 a.m. until time of service on Wednesday. Interment will be in Mount Olivet Cemetery, Carverton. Arrangements are by the Paul F. Leonard Funeral Home, Pittston.
In lieu of flowers, a tax-deductible donation can be made in Biagio's name to the Elaine L. Dente, R.Ph. Memorial Scholarship c/o UNICO, Scranton Foundation, PO Box 278 Dunmore, PA 18512.
Posted by David Yonki at 7:27 PM 2 comments:

BEFORE WNEP, THERE WAS A WARM TV

WNEP TV actually started out as WARM TV. But it has always been known as Channel 16. When Bill Scranton joined Union Broadcasting, things started to happen. Scranton was not only an advisor but was known as "a substantial stockholder". One of the big happenings was the advent of Channel 16 starting out as WARM TV. All that was needed when this appeared in the press was FCC approval.
Here is the article about it from June 20th 1952 in The Tribune from our good friend and contributor Joe Klapatch.

Posted by David Yonki at 8:21 PM No comments:

When WARM Radio was 12 years old in 1952, William Warren Scranton was the future Congressman, Governor, Presidential candidate, Ambassador and lifelong diplomat. That was the future.
However in '52 Scranton joined Union Broadcasting and WARM Radio in an Advisory position. It was an exciting time for WARM because just days after this article was published on June 27th in The Tribune, WARM went to the storied 5,000 watts of power.

Here's that article courtesy of our good friend and 590 Forever contributor Joe Klapatch. (Click on photo to enlarge).
Posted by David Yonki at 8:13 PM No comments: