Before there was a Wendy's, Burger King or McDonald's in WARMland, there were Stop 'N Go restaurants. The chains sported yellow roofs and very inexpensive hamburgers. Stop 'N Go did a promotion with WARM giving out "Ballad of WARMland" records. But just like those big fast food chains we know of today, "The Ballad of WARMland" had a precursor. And that of course was the melody from the Stop 'N Go commercial. The vocal is by vocalist Terry Lee who also did "The Ballad".
Posted by David Yonki at 9:45 PM No comments: 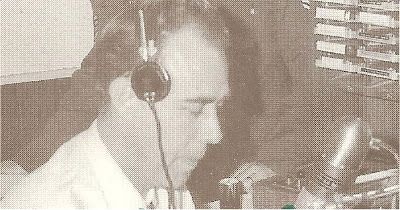 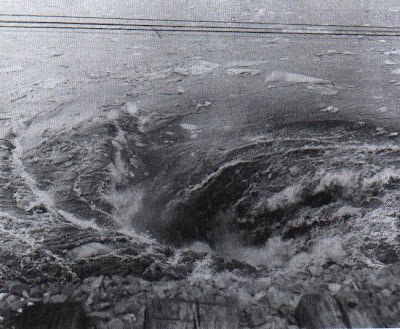 When you work at a radio station there are clearly delineated roles. And never the twain shall meet. Except of course for emergencies. And one such huge challenge occurred in WARM Radio’s infant stages into the foray of Top 40 radio. On Jan. 22nd, the Knox Mine Disaster happened. For reasons that still remain a mystery, there was no one available in the WARM News or Programming Department. Bill Musser a salesman at the time went to the disaster and was the first reporter on the scene. He had the savvy street skills to obtain the only phone from a house next door to the disaster in Port Griffith.
As time went on, the national and statewide news arrived. The house was set up as a makeshift newsroom. Don Stevens who was Program Director at the time marshaled every available employee into the equation. WARM Radio dominated the news coverage. 27 men trapped and no end to the impending tragedy in sight.
While other reporters were trying to get their bearings, Musser, Stevens and Art Carlson were near the collapsed mine shaft. Suddenly there was a scream saying that the surviving miners were on their way out of the deadly shaft. There was a washed out railroad track near the mine shaft where the miners were coming out. The lanky Stevens ran on the remaining track bed to see the exit from danger. Stevens called the station and gave the first eyewitness report. Art Carlson said that Stevens had a penchant for saying the word “Yes Indeed” whenever he was exited. On the last report from the mine disaster, Stevens in those deep down dulcet tones said, “Yes indeed! This was the miracle of Port Griffith!!!!"
Don Stevens remained at WARM for another half dozen years after that fateful day in January. While I’m sure the rest of his tenure was fun filled and action packed, nothing could match the day that Don Stevens and Don Musser broke the biggest news story in WARMland that year.
Posted by David Yonki at 9:23 AM No comments: 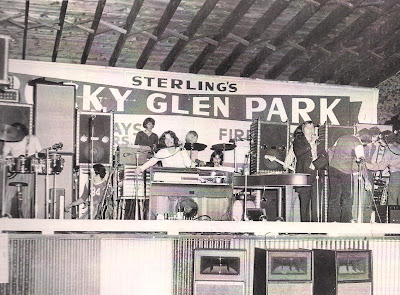 WARM Day at Rocky Glen Park didn’t just happen. First off there had to be a central location. What better place than in the mid point of Wilkes Barre and Scranton. Rocky Glen Park was a natural. The late Al Kornish said the only way Rocky Glen owner Ben Sterling would meet was over lunch in the park president’s office. Kornish related that Sterling would take his desk, clear it and put a checkered table cloth across it. Sterling would then order lunch, which in the summer was amusement park fare and for a few hours the duo would discuss the world, the nation and what have you. Kornish related that in his very first meeting with Sterling, the amusement magnate said that the WARM Sales Manager should buy his book. Sterling solemnly said it was a type of biography entitled “What I Have Learned About the Amusement Business In Forty Years”. Kornish eagerly said he'd buy the book and Sterling said he’d send it to him. A few weeks later Kornish got a package COD (Cash On Delivery) for $14.95. When he opened it up, he saw Ben Sterling’s Book, “What I Learned About the Amusement Business In Forty Years”. When Kornish sat down to read the book, it turned out there were hundreds of blank pages following the title page.
This story is illustrative of how sales people, and yes sometimes General Managers used to interact with some clients. While the public saw the glitz and glamour of WARM Day, and the radio personaltites rubbed elbows with the stars, all of that would never have happened without the time, effort, bonding and comraderie cemented over a checkered table cloth. And of course, a little practical joke also had to be thrown into the equation. That never hurt either.
Posted by David Yonki at 6:32 PM No comments: 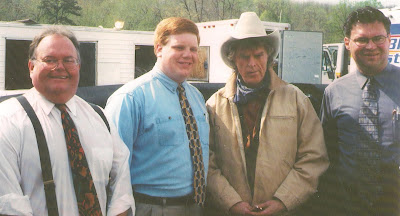 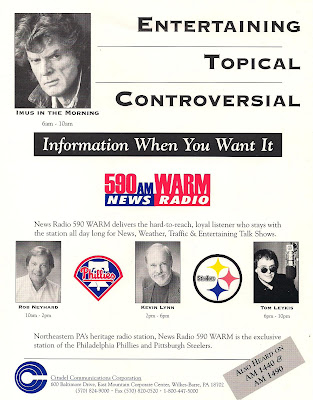 PHOTO INDEX: DON IMUS ON HIS FIRST VISIT TO WARM (THE ONE WHERE HE ACTUALLY STAYED) FROM LEFT TO RIGHT, THE BLOG EDITOR, THEN PROGRAM DIRECTOR GREG FOSTER, THE "I MAN" HIMSELF AND WARM SALES MANAGER GREG STROM.
BOTTOM PHOTO IS A WARM SALES HANDOUT FEATURING THE ENTIRE TALK LINE UP. (CLICK TO ENLARGE).

During the 80s WARM developed what the late Sales Manager of the Mighty 590 Tim Durkin called a “hybrid format”. During that time WARM had music in the morning and then after the Sports Line with Ron Allen which alternated between being on at 5 or 6pm, WARM went talk all night.
It wasn’t until the mid 90s that WARM went all Talk. By the end of the decade WARM had been in a battle with WILK AM for Talk Show supremacy in the market. WARM featured the syndicated Don Imus program followed by Ron Nyehard and Kevin Lynn and then having the very liberal Tom Likus on at night. Later on due to budget cuts Nyehard was moved to sports exclusively and Lynn became the sole local talent. WARM continued its popular remotes with Lynn doing remotes for Pittsburgh Steeler games. Rob Nyehard continued his popular series “Rob On the Road” where he went to various businesses. WARM had lost the Eagles and Penn State football in a bidding war but continued sports with the acquisition of the Steelers.
Posted by David Yonki at 5:44 PM 2 comments:

While personalities heard on a radio station get the bulk of recognition, people behind the scenes also make a great radio station. WARM had a succession of very good general managers who helped guide the station through the business waters. One was Alan Kornish. The secret of Kormish’s success at WARM was that he let his people under him manage. There was some direction but he let the ideas fly.
Alan E. Kornish, 74, of Exeter died Thursday, Jan. 6, 2011, at home. Born Sept. 28, 1936, in Scranton, he was the son of the late Alex and Helma Trager Kornish. He was a graduate of East Stroudsburg University with a degree in teaching. Alan's lifelong career was in broadcasting and he was formerly employed by Susquehanna Broadcasting "WARM" radio. Kornish started out as a Salesman at WARM in the early 60s. He was promoted to General Manager in the late 60s. Under his stewardship WARM continued to grow ratings wise as well as in sales. He was instrumental in the transition from Harry West as Morning Man to Len Woloson in early 1969. Working closely with WARM program director George Gilbert, Kornish gave the okay to expand the WARM News Department. Old friends and co workers attended his wake in Plains and once more remembered one of the human the building blocks that built The Mighty 590.
Posted by David Yonki at 7:19 PM 2 comments: 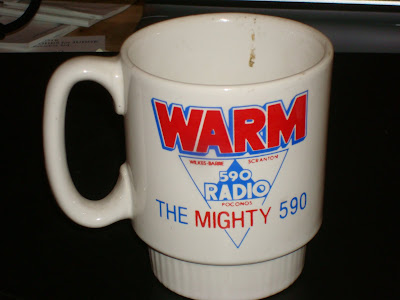 One of the most sought after WARM collectible was the WARM COFFEE MUG. WARM gave them away sparingly at first, afraid that they’d run out of them. But cooler heads prevailed in management and at one point in the 90s the WARM coffee mug became the most ubiquitous office accessory in WARMland. At first the station gave away the mug with a tin of Folgers coffee. Then they became prizes at event. Finally at trade shows the WARM mug went corporate as a gift to business leaders and followers for that matter. Through the years, the once coveted WARM mug has been on sale at yard sales and even once there was a rumor it was on E Bay. (I looked, couldn’t find it). The WARM mug stands as a testament to what a little promotion will do in radio. Oldsters drank their coffee, kids drank their hot chocolate and Lord knows how many dates, harassment suits, hiring, firings, promotions, corrective actions and staff meetings went on accompanied by the venerable WARM mug. Long gone, but kept by a few pack rats in WARMland, the WARM coffee cup is another WARM memory.
This song by Frank Sinatra says it all about coffee, and Sid Marks weekly Sinatra program is heard Sundays at 10AM on the current reincarnation of the Mighty 590.