WARM RADIO BACK ON THE AIR!!!

WARM Radio returned to the airwaves this week with a different format. The Mighty 590 has been off the air for at least three or four months. WARM returned this week with a stronger signal (for now) and a new identity. WARM is now CBS Sports Radio. WARM becomes the fourth station in the market that is now all sports. Plus there are now 9 frequencies that carry all sports. WARM joins Rock and Roll powerhouses like WKBW in Buffalo, CKLW in Detroit and WCFL in Chicago (now believe it or not, WSCR!!) that became all sports. I'm glad to see WARM back but will miss the oldies.
Posted by David Yonki at 9:00 PM 1 comment:

WARM Radio was always heavily involved in promoting local sports. Ron Allen and George Gilbert started the tradition of previewing local teams. The tradition was continued by Kelly Reed as well as Bobby Day who was an anchor for the high school events as well as a sideline reporter. Bobby who is now the Voice of the Arena for Penguins Games at the Mohegan Sun Arena also coordinated WARM's presence at area sports banquets,. This is a report and photo from Bobby's Face book page.
From one of the many banquets/dinners WARM radio hosted thru the years..Most people couldn't believe the celebrities that would come through Scranton/Wilkes Barre, but there were quite a few..and they all seemed to enjoy speaking at our events, esp. the Boy Scouts of America dinners with our good friend Don Simpson!! Kenny Stabler joined us at a UNICO dinner!!
From left, Mark Duda, Lou Michaels, Kenny Stabler, Kelly Reed, Greg Skrepenak and Bo Orlando. 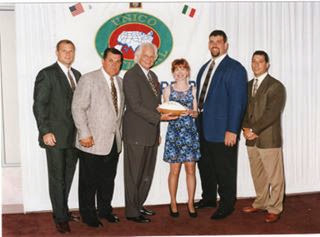 Posted by David Yonki at 8:52 PM No comments:

The other night a reunion of a sort was held by former employees of the Susquehanna Broadcasting Company, the company that for many years owned the Mighty 590 WARM and of course Magic 93. Kelly Reed the former sports reporter for WARM came in for a visit from New York with her husband Emmett. The event was coordinated by Reed and Tommy Grimes both who did stints on WARM and Magic 93. About 20 or so former WARM and Magic employees attended. I was happy to be invited even though I was an employee of WARM in Sales in the post Susquehanna era. Also attending were radio and TV broadcast icon David DeCosmo as well as WILK's Sue Henry. Here is a recap of some of the meet ups I had:
DARRYL DAVIS:  Darryl was the producer for the morning shows on WARM with both Harry West and Terry McNulty. Davis was also the guy who set up some of the computer systems for the station. Darryl is now working in health care and we both recounted some of the after show breakfasts we'd have with Harry West after his program.
KELLY REED: Kelly and I swapped stories about the initial seasons of the Wilkes Barre/Scranton Red Barons. WARM was a big player in the promotion of minor league baseball in those early seasons.
JOE OHRIN: The always comical Joe Ohrin upon seeing me said, "Don't get up, you must be 100!" I did and we chatted about some of the promotional remotes WARM had in the early part of the 2000 as well as his work at the Wyoming Valley Mall.
TOMMY GRIMES: Tom shared the fact that he actually did a stint on WARM but then spent 17 years on Magic. Grimes is a successful trucking executive but has a special place in his heart for all things radio. Grimes told me that one of his biggest boosters and mentors from his early days of broadcasting was the late Jim Emmel. Emmel was a teacher who loved broadcasting, had a great set of pipes and was one of the most beloved members of the WARM team. Emmel previously worked at WGBI AM and FM as well as an AM station owned by former Lackawanna County Commissioner Bob Codero's WWAX. Tommy was a wealth of knowledge and that should come as no surprise since he had the passion to coordinate this event. This was the guy after all that set up this great event.
JIM LOFTUS: Magic was of course the old WYZZ FM before Susquehanna bought it. That brought a flood of stories from former WARM/MAGIC/HOT 97 (now BHT) GM Jim Loftus. Loftus told about his job interview as a youth at the house on Prospect Street in Wilkes Barre hat housed the 50,000 watt powerhouse WYZZ and opined on the changing state of broadcast radio in this new century. Arriving with Loftus was his wife Renee, a former Hot 97 personality as well as Jerry Paparelli who was a Sales Manager for Hot 97 and then later at Rock 107. Loftus currently is the GM at WOGL and its associate stations in Philadelphia, his wife Renee recently retired from Wilkes College and Paparelli is working in Regional Cable Sales.
BOBBY DAY: Bobby arrived late because there was a Penguins game and he is the Arena voice of the team. Bobby and I spoke of his time at WARM in both news and on the air. Bobby recently was associated with WBRE/WYOU TV as the News Assignment Editor.
TOM JENKINS: When I was at WARM in sales I had the opportunity to work closely with Tom Jenkins. Jenkins was involved in production of some very good radio commercials that were client favorites. Jenkins is now associated with The River, 104.9FM. We also had a very animated discussion about hair care or lack thereof, hair, not care, these days for both of us.
JERRY PAPPARELI : Jerry and I had the opportunity to swap stories about our time at Rock 107 as well as the cousin of his that I friended on Face book thinking it was him. Jerry was and is a passionate broadcast guy and recounted stories about his time at WWDL, Q102, Hot 97 and Rock 107. We also remembered the late Tim Durkin who was the General Sales Manager at both Magic 93 and Rock 107. It is 10 years since Tim  passed away much too young.
DAVID DECOSMO AND SUE HENRY: When the three of us sat together, well let's just say the radio talk began to fly. DeCosmo told many stories of his radio career in Hazleton at WAZL, WNAK in Nanticoke, WILK in its South Franklin Street location before his TV broadcast career on WYOU. DeCosmo currently cohorts a weekly show on ECTV. David and I also regaled Sue with our days on the softball field. He was good,  I was not. Sue also got into a great discussion with us about how young, budding journalists are setting their sites on being the heirs to the people assembled in the room at Grotto. There were a few people I did not get a chance to interact with like Bob Lenio and Suzie Quinn. There were many who sent their regrets like Tom Woods. Harry West, Rob Neyhard and Joey Shaver. Then there were those we tried to get contact numbers for too. That said the event was a great time to bring back old memories of fine, hard working  people involved in the endeavor of broadcasting.
And as always, WARM, the MIGHTY 590 was on top of the discussion list. Here are the photos: 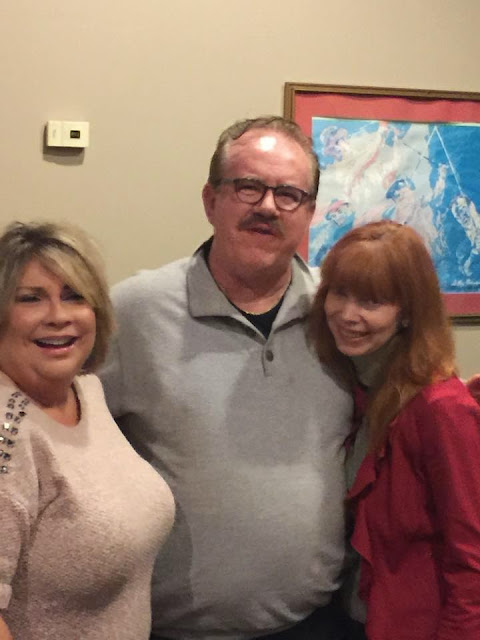 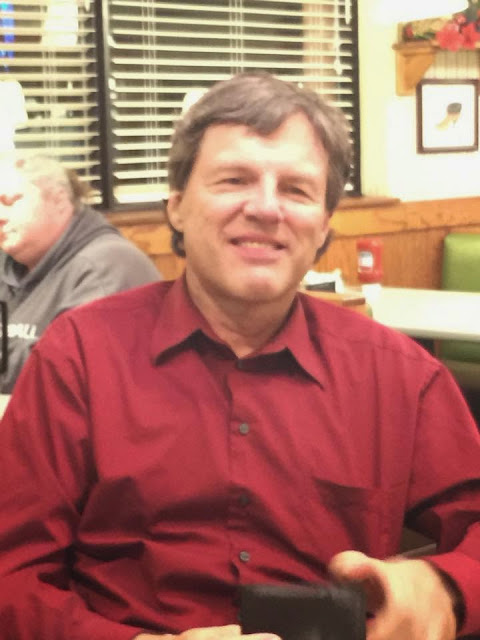 This is the guy I really wanted to speak to about getting The Mighty 590 back on the air. Bob Lenio who was one of the best engineers Susquehanna ever had. 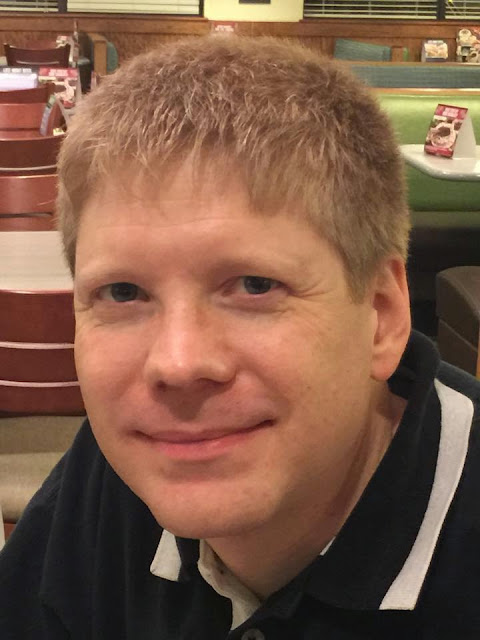 Dave Zukosky was also in the house that night too! 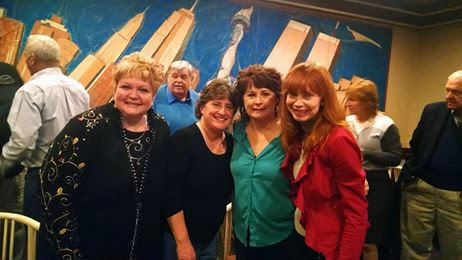 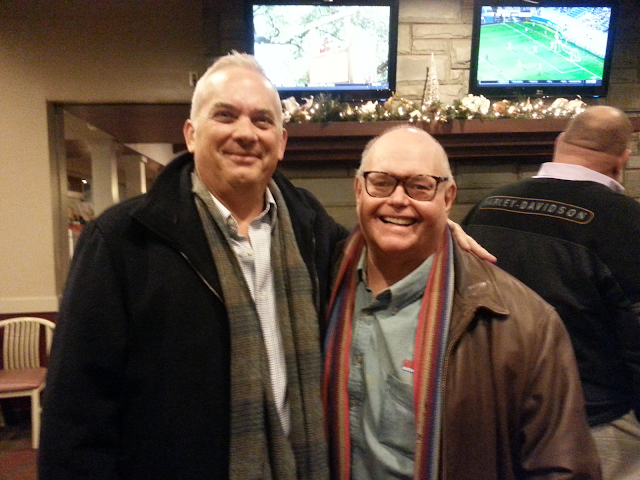 My former boss Jerry Paparelli at the event. 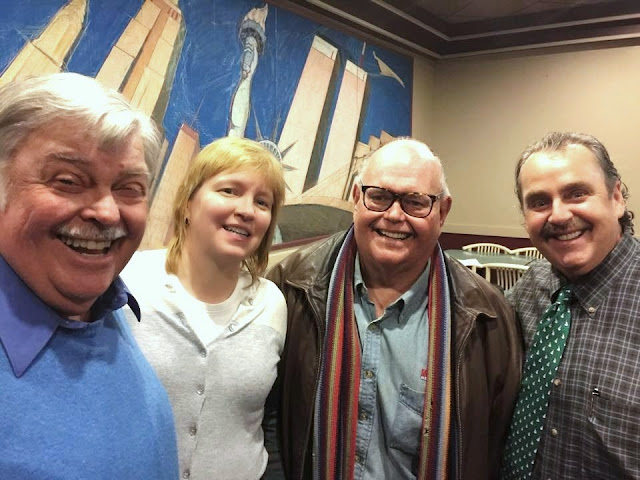 Here's a true meeting of the minds, David DeCosmo, Sue Henry, your blog editor and yet another boss of mine, Jim Loftus.

This spring WVIA TV did a feature called "Back In the Day". Produced by Ben Payavis and hosted by Larry Vojtko one of the shows centered on WARM Radio's relationship with the storied amusement park. WARM Day was a huge event every summer. As a matter of fact it was the cap off to summer. WARM played host to many a top 40 rock act. In this segment WARM great Joey Shaver takes us on a tour of the memories at the Glen.
Posted by David Yonki at 6:07 PM No comments:

WARM Radio was heavily involved in a promotion in the late 1980s spearheaded by ad agency executive and former WARM personality Bob Woody. The event was designed to stress the similarities instead of the differences between Wilkes Barre and Scranton. On an autumn day in 1988 the entire WARM staff was there in force to do a live broadcast and lent a hand. And of course with any big party, there was cake! 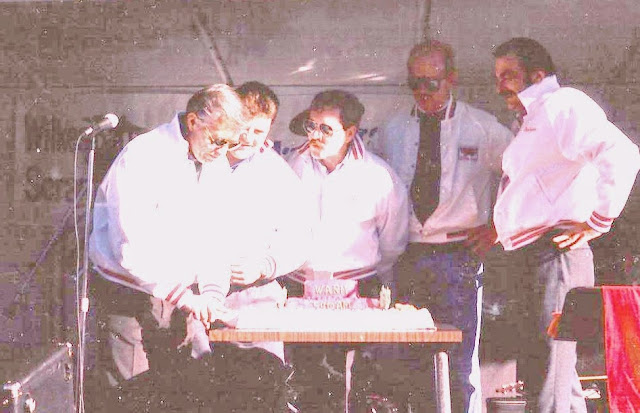 Harry West is wielding the knife as Paul Ciliberto, Terry McNulty, George Harris from 98.5FM and Norm Hill look on.
Posted by David Yonki at 3:43 PM No comments:

TOMMY AND THE CONGRESSMAN

The late Congressman Dan Flood was a very familiar figure in WARMland. Flood was a mainstay in the district and would show up at various events. He lived full time in the District in a modest home on Pennsylvania Avenue. However in Washington Flood was known for his flamboyant style. As a matter of fact in the 1970s Flood was featured on the cover of Harper's Magazine. With an article entitled The Best Congressman". The article as well as the cover only heightened the legend of Dan Flood at home and abroad. 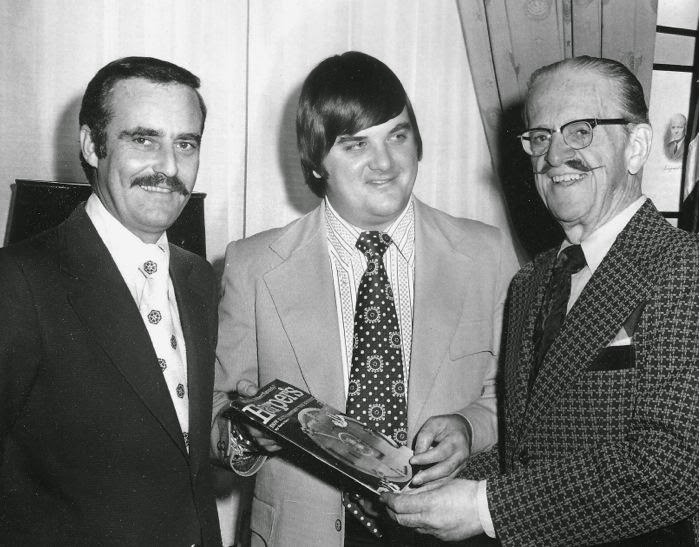 Former WARM personality Tom Woods, by that time doing news on WTOP Radio, then a news giant in the radio world had a photo op with the author of the Harper’s piece. George Cole (center) as well as the Congressman.
Posted by David Yonki at 3:38 PM 4 comments: