ON APRIL 23rd, WARM RADIO RETURNED TO THE AIRWAVES. THERE WERE NO COMMENTS FROM MANAGEMENT. BUT THE MIGHTY 590 AND TRUE OLDIES ARE BACK.....WHERE THEY BELONG!
Posted by David Yonki at 7:00 AM 6 comments: 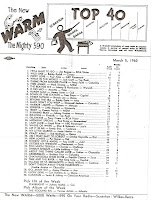 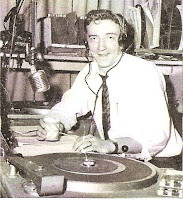 This was the song WARM used as their # 1 song for the year, 1958 when they had their 20th Anniversary show in early June of 1978. #1_Song_With_GG_&_Tommy_Edwards(58).mp3.
It only seems fitting that George Gilbert who was there at the beginning & near the end of WARM's run as we knew it would be on this outtake with the #1 song from 1958, the year they went top 40 radio & which kept them on top for the next 20 years or so.
I recorded this when it happened back in 1978 & for me it is a final tribute to a radio station that EVERYBODY loved back at a time when radio was king. So enjoy, reflect & reminisce one more time to WARM The Mighty 590 , The Original Sensational Seven (DJ's) and to all who were a part of the history from that era. So long WARM.

WARM Radio, born in 1940, having come into adulthood in 1958 at the age of 18 as the landmark rock and roll station for a generation was officially declared dead on Wednesday, April 15th, 2009. WARM spent its childhood in Scranton, moved to the center of the Wilkes Barre/Scranton radio market in its legendary years in the small town of Avoca and entered its declining days at 600 Baltimore Drive, Plains Twp. Causes of death were neglect of its power source, changing tastes in music and technology as well as low revenue. Surviving are thousands of avid listeners and fans who grew up with WARM Radio. There will be no calling hours. Private services are up to citizens of WARMland's collective memories and individual schedules.

FROM THE TIMES LEADER'S JERRY LYNOTT:

PLAINS TWP. – WARM, the AM-radio station synonymous with Northeastern Pennsylvania, is off the air after broadcasting news, music and sports for more than 50 years.
The station has been silent and a posting on its Web site thanked listeners for their support. “We love you and we’ll miss you,” it read.
Calls to the Citadel Broadcasting Co.-owned station were not returned Wednesday. “WARM is done,” said Sam Liguori. “Unless there’s a miracle they ain’t coming back.” Liguori, 72, of Forty Fort, hosted a Saturday polka show. He said the station’s backup transmitter had failed. “It’s a big technical problem that would cost a lot of money” to repair, he said.
Listeners found static when they tuned in to the station’s 590 kHz frequency for the past week. Unable to give a final sendoff on the air, Liguori thanked his audience and sponsors. “I hope the four hours a week that I was on the air put some joy in your life. That was my goal,” he said Wednesday. At its height in the 1950s, ’60s and ’70s, WARM, known as “The Mighty 590,” featured on-air personalities playing the latest Top 40 rock ‘n’ roll records. They populated their shows with signature characters and their antics entertained listeners well beyond the Scranton/Wilkes-Barre area on the strength of its 5,000-watt transmitter.
The station changed hands, formats and locations. It billed itself as the “True Oldies Channel” with a playlist containing some of the songs WARM’s “Sensational Seven” disc jockeys spun on 45-rpm records in its Avoca studio. “We had a talented bunch of guys,” said Harry West, 79, of Kingston. He worked at the station from September 1959 through July 1992 and then moved around to other local stations. “To this day I will be someplace and somebody will know me by my jingle,” West said of the catchy intro to his show. The shows were fun. The station was popular. And it won’t be duplicated. “The format was, there was no format,” West said.
Still, the station must adhere to Federal Communications Commission rules. WARM’s owner must give notice of an extended disruption of service for up to 30 days because of events beyond the control of the station owner. “They don’t have to notify us for 10 days,” said David Fiske, an FCC spokesman. If the station fails to broadcast for 12 consecutive months, its license expires, according to FCC rules. Should it come to that, Joe Nardone Sr. said he would have plenty of good memories.“They’re the one who introduced rock ‘n’ roll to the valley,” he said. The station also helped Nardone promote music shows at the Sans Souci Park. He said he did some clandestine market research back then to make sure he attracted big crowds. Nardone said he would send out people with flashlights to the parking lot to shine the lights on the radios inside the cars. “We wanted to know what they were listening to,” Nardone recalled. Nine out of 10 of the radios were tuned to WARM, he said.
Jerry Lynott, a Times Leader staff writer, can be contacted at 570 829-7237.
This blog/site, 590 FOREVER will continue to chronicle the historical aspects of WARM RADIO.
Posted by David Yonki at 6:21 AM 18 comments: 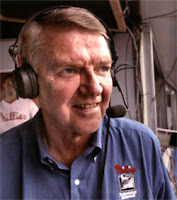 PHOTO INDEX: THE LATE HARRY KALAS AND TOMMY WOODS AND SON, CIRCA 1980, AND HARRY KALAS IN PHILLIES BROADCAST ATTIRE.
HARRY KALAS
A major part of WARM Radio history was the broadcasting of Philadelphia Phillie games. An intregal part of that era was Harry Kalas as the lead broadcaster of the National League team. We have two tributes from past WARM personalities Tommy Woods and Michael Neff.
Hi Folks
It was very sad to hear that Harry Kalas, the Philadelphia Phillies announcer passed away....here's a picture of my son Tommy, Harry and me taken back in the 80's.
Tom
AND FROM MICHAEL NEFF:
Editor -Philadelphia Phillies fans were shocked and saddened on Monday by the abrupt passing of "The Voice of The Phillies." An energetic 73, Harry Kalas was in the broadcast booth preparing for a game in Washington DC as the Phillies were about to face the Nationals. It was to be a game he would not describe. You've heard Harry Kalas many times, and, perhaps, were unaware. He was the Voice of NFL Films, Campbell's Soup, GMC Truck,Westwood One network football games and other radio-TV appearances. Like baseball broadcasters Vin Scully, Jon Miller, Harry Caray, and John Sterling, Harry Kalas had one of those "lazy Sunday afternoon" announcing styles making the National Past Time so enjoyable on the RADIO. All was well with the world when Harry's silky voice came gently booming through the speaker. He focused on the game and provided insightful analysis in his banter with his broadcast partners ... most notably the late Richie Ashburn. As a life-long Phillies fan, I grew up listening to games with the legendary By Saam and Bill Campbell on W B P Z in my hometown of Lock Haven, Pennsylvania. Many nights, a tiny transistor radio accompanied our group of aspiring ballplayers while we played Strat-O-Matic Baseball, the board game replicating our boyhood passion for the sport. The year Harry joined the broadcast crew, somehow, the game itself sounded "modernized." To our ears, it was a great merger of tradition with a fresh, new approach. Harry Kalas will now be announcing games in a distant ballpark, at present, we cannot hear. One day, we will. Until then, whenever I catch a Phillies home run call, I will fondly remember his signature ..."It's Outta Here!" The wonder of baseball Harry Kalas inspired will always be here, too.
Michael Neff
Posted by David Yonki at 6:07 PM 2 comments: