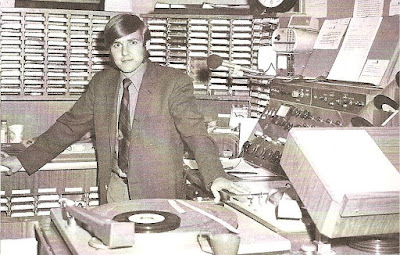 Shaver at the helm,

Joey doing a promotion during the Vietnam War where WARM sent a message to a fighting veteran in Southeast Asia. 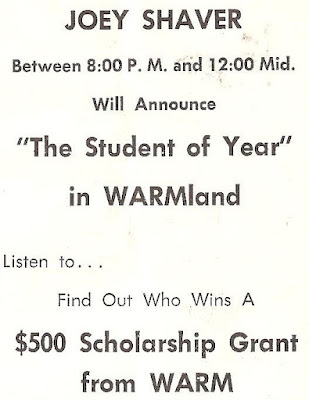 Since Joey's show had the largest teen audience, many a WARM prize winner was announced during his program. 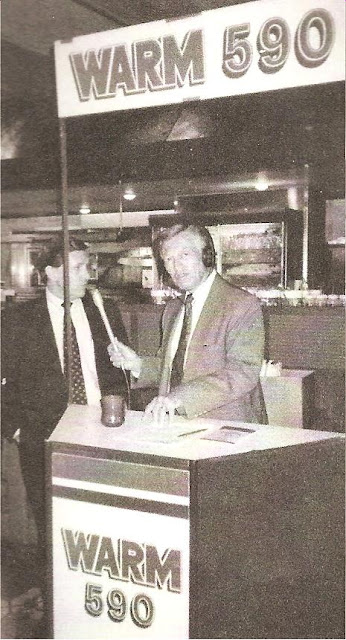 Even afer he left the airwaves to become the most successful WARM salesman and manager, Shaver made sure every remote and appearance ran as he liked to say, "smooth as glass with a lot of class!"

Then there were those WARM survey sheets coveted by many a teenager growing up in WARMland. 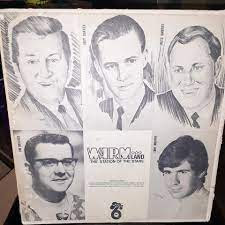 Of course Joey was highlighted on those WARM LPs that featured the greatest hits of the day. 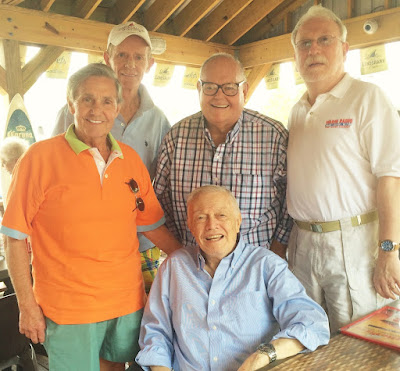 At Harry West's going away party Joey was in great form on that great day. When WARM Radio listeners say that they knew Joey Shaver all their lives, I believe them. Mainly because I was one of them. But my relationship with Shaver was not just a radio thing, I had the great opportunity to know him for more than sixty years of my life. The first stage was of course from WARM Radio. Shaver was a “go to” stop for my young musical tastes. Up until my Senior year in high school, Shaver was just a voice on the radio.

When I was graduating high school, I wanted more than anything to be a broadcaster. I inquired about a technical course at Career Academy of Broadcasting. It turned out that Shaver was a local representative of the school. I did an audition tape at the then vaunted WARM building and was accepted into the school at Washington, D.C.  When I did the audition, Shaver allowed my dad to stay in the room with me and when I was finished, the look of pride on my father’s face was all I needed to try and succeed.

My next encounter with Shaver came after Broadcasting school and was when I was working at WVIA FM. Shaver then a WARM sales rep was doing a stint as an Action Auction [DY1]  guest and took a tour of the studio. Shaver said about me to my boss George Strimel, “This is one of my guys!”

Later I interned at WARM for a week and Shaver took me to a Kiwanis luncheon meeting. At that time, the Wilkes-Barre Kiwanis Club had over 100 members. It was my first exposure to the then leaders of the community sand proceed invaluable to my own career in the years ahead. This was mid-February and on the ride back to the station Joey was hellbent on getting special flowers for the love of his life Judy. He was a man on a mission trying to get the right ones that she’d like.

When I became a member of the Kiwanis club myself, thanks to Rob Friedman and Mark Holtzman, we had a meeting with then Vice President of the United States, George H.W. Bush.  While the rest of us, Bernie Mengringhausen, Frank Procopio, Nelson Caryle, Friedman, myself and others, went by car, Joey took his plane. All of us were thrilled to meet the VEEP but Joe was beside himself bursting with pride that only a veteran like himself could appreciate.

Through my years at United Way and other agencies, Shaver served as my radio rep even though he was the Sales Manager at WARM.  He always introduced himself as “The best radio sales person” in the area.

Through the years, Shaver would always say, “You should work with me someday”. After my radio selling career abruptly ended (as they sometimes do) Shaver hired me to work with him at Cable Rep Advertising. We’d go out on Sales Calls together and he was of course a master. Our lunches together were quite memorable in the sense that he enjoyed every morsel and inquired to the waiter or waitress exactly what that ingredient was that made the food taste so good.

One day we went to Shoe Shine Shop in Scranton and as the man was shining his shoes, he had a look of pure joy on his face. Joey loved the small things in life.

Through his later years he stayed active in making sure “his music” remained alive with Joe Nardone’s oldies shows.  His Dance programs on WVIA TV were magical and again gave him the opportunity to share his loves and passions.

Joey Shaver was a public person to be sure. But he joyfully shared his life with the people that sustained his career. Shaver will be counted as one of the members of the pantheon that is known as the WARM Sensational Seven, Good Guys, or Legends. He was a key part of a bygone era.

His radio handle at one time was “Little Joey Shaver” But he was anything but. Joey Shaver was a giant as radio personality but more importantly as a friend and gentleman.

Excellent tribute to a great guy I enjoyed working with him over the years. Just saw him and Judy this past summer R.I.P. MY FRIEND